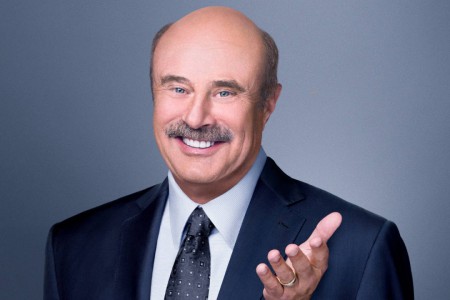 If you are familiar with the hit syndicated daytime talk show, "Dr. Phil," then you obviously know about the show host and executive producer, Phil McGraw. The 69-year-old, McGraw, is an American television personality and author who holds a doctorate in clinical psychology although not licensed to practice.

McGraw first received celebrity status with appearances on The Oprah Winfrey Show in the late 1900s. Further, Oprah helped him launch his program Dr. Phil in September 2002. The renown personality has been married twice and has two sons from his second marriage.

McGraw is leading a happy married life with his second spouse, Robin Jo Jameson, since 1976. The couple has broken the myth of society by being together for over four decades of marital solidarity.

Phil tied the wedding knot with Robin after dating her for three years. He initiated a romantic affair in 1973 with Robin, and during the time, Phil was in the process of annulling his first marriage. Also, Robin was his sister's friends, and they first met at his family house.

For the past many years, the husband-wife duo is contributing as counselors for many people on their issues. Further, Dr. Phil's wife, herself, is an accomplished woman. The 65-year-old, Robin, is the number 1 New York Times best-selling author. Some of her best sellers are the 2009 Christmas In My Home and Heart, 2007 From My Heart to Yours, etc.

In an interview with People, Robin shared that the pair know the key to a successful marriage. Both Dr.Phil and his wife revealed that their fathers were both alcoholics, a pain that McGraw says drew the couple closer.

Know The Truth About Phil And Robin's Divorce Rumors

Phil and Robin are touted as a power couple and a charitable force in the industry. However, they became the center of divorce rumors in late November 2019. Social media users asked the Tv psychologist if he was separating from his wife. Well, he didn't respond to the rumors, and neither denied it.

However, looking at their social media account, their daily posts show that still Phil and Robin are one of a kind. They look incredibly happy to be with each other, and the divorce rumors are entirely false.

Over the four decades of a successful marriage, Dr.Phil and his wife, Robin has successfully managed to raise two sons. Their first son, Jay McGraw, was born on September 12, 1979. Similarly, their second son, Jordan McGraw, was born in 1986.

The McGraw's sons have made their parents proud of their successful careers. Jay partially followed in his father's footsteps, publishing books aimed at teenagers and working as the CEO of a production house named Stage 29 Productions.

Jay is happily married to his wife, Erica Dahm, one of the famous Playboy Playmate triplets. The couple has two children, Avery Elizabeth McGraw (b: 2010) and London Philip McGraw (b: 2011).

Talking about Phil's younger son, Jordan is a renown musician and singer who has been working as the frontman of the band, Hundred Hundred. He is not married as of now but is dating his girlfriend, Ragan Wallake.

Dr. Phil's first wife was Debbie Higgins McCall, an ex-cheerleader and homecoming queen. The former husband-wife married in 1970, and at the time, Phil was just 20 years old.

Everything was going perfectly until one day, Debbie felt that Phil was dominating her too much. As per Debbie, he would not allow her to participate in the family business and claimed that she was confined to domestic duties. They annulled their marriage in 1973 after a reportedly bitter separation.

How Much Is Phil McGraw's Net Worth?

The famous daytime talk show host, author, and former psychologist, Mr. Phil McGraw, enjoys a huge net worth of $440 million as of 2019. Dr. Phil is one of the highest-paid personalities on television, and at his peak, he was earning a jaw-dropping $88 million a year.

Between June 2018 and June 2019, Phil earned $95 million, while his annual income from the show Dr.Phil alone is around $80 million. Apart from being a successful tv host and executive producer, McGraw has also written several books, all of which have been commercially successful.

After years in the media and public spot, McGraw has a staggering wealth to his name. He can afford pretty luxurious things, such as exquisite properties. In 2002, Phil and his wife, Robin, purchased a luxurious Mediterranean-style mansion for a whopping $6.25 million.

In 2010, Phil and Robin listed their Lexington Roadhouse up on the market. In 2011, they sold the house for $12 million, $6 million more than what they paid for it in 2002. Apart from having several mansions, Phil also has a love for luxury vehicles. Therefore, he lives a vibrant and extravagant lifestyle maintaining his old humbleness.

This article gives full detail about one of the most renowned faces on television, Phil McGraw. To know about your favorite personality, follow marriedceleb.