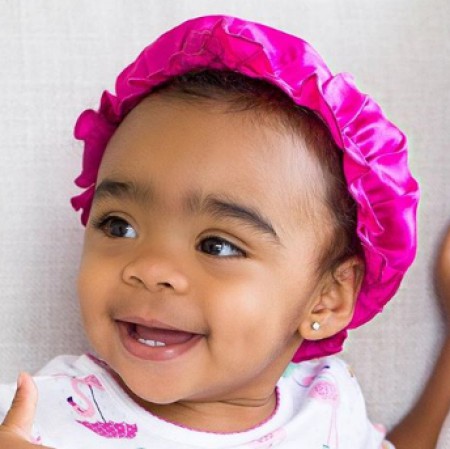 Who is Reign Ryan Rushing?

Reign Ryan Rushing is the daughter of American reality television personality and the author Antonia "Toya" Johnson. Rushing is also a step-daughter of famous rapper Lil Wayne with whom her mother Antonia was previously married.

Reign was born on February 8, 2018, in the United States. She is a year old as of now. She holds an American nationality and belongs to African-American ethnicity. Further, her birth sign is Aquarius. She has an elder sister Reginae Carter from her mother's previous marriage.

Rushing is a toddler, she is living along with her parents. Mother Toya and father Robert are enjoying their parenthood. Ryan just had her milk tooth which can be seen on her Instagram. Yes, this little baby has her own personal Instagram profile. Seems her parents found a way to bring her to the limelight from so early age.

Soon, Rushing will be attending school. For now, she is being raised under the guidance of her parents. She is the most loved little princess in the family. However, mother Tonya has managed her time to look after her daughter. She takes her for dance classes, swimming and fun parks too. Mother Tonya knows the best for her daughter.

The one-year-old, Reign is on a growing phase. So still, the celebrity kid has yet more to come to her life. Coming from a celebrity family, she is accessed to the limelight. Likewise, her mother Tonya has also been into the limelight from an early age because of her relationship with famous rapper Lil Wayne.

Toya met her former boyfriend turned husband Lil Wayne at the age of 12. She became pregnant at the age of 14 and gave birth to her first child a daughter, Reginae Carter on November 29, 1998. The couple got married on February 14, 2004. However, their marriage relation came to an end to her inability to cope up with Wayne's lifestyle.

Even after the divorce, Toya and Wayne maintained a good relation and continued to raise their daughter Reginae. Later on, Toya love life took another turn when she met a guy named Memphitz Wright.

Toya started with a casual date with Memphitz Wright. On 2011, Toya and Memphitz relationship eventually turned to marriage. Unfortunately, their nuptial relationship also ended with a divorce in 2015. Until now, the reason behind their separation hasn't been confirmed.

Subsequently, Antonia went for a relationship with clothing brand owner Robert Rushing. The duo exchanged wedding vows after dating for a while. From their blissful marital relation, they together had a baby daughter Reign Ryan Rushing.

Ryan is in her growing phase. She is a toddler who is enjoying her childhood under her parent's supervision. Reign has curly black hair and her eyes are brown in color. She features her mother's look and her father's eyes.

Reign Ryan Rushing enjoys sumptuous asset possessed by her parents. She is being raised in a rich and prosperous manner. For now, she is relishing her parents combined net worth alike Olivia Lou Sykes. But in the future, she will surely earn a good fortune by herself. At least taking birth and being raised in a celebrity house, it must be great leverage for her in career growth.

Besides, her mother Toya has a net worth of over $4 million. She also endorses various brands. She has also released many books under her name. As an author, she earns a good remuneration. Additionally, she has amassed wealth through her TV series. Her annually income is expected to be over $100,000. Apart from that, she is also involved with philanthropic works.

Reign's father, Robert owns a clothing line. He brands with his enterprise "Red". He is also a sports manager in Atlanta. His allover asset is predicted to be over $2 million. In addition to his income, Robert also adds a good sum to his bank balance from his travel company.

Presently, the family lives an affluent lifestyle. The couple and the daughter also spends quality time holidaying in some of the exotic places.

Being born to the celebrity family, Ryan has garnered a huge popularity. She has over 316k followers on her Instagram profile. Her mother Antonia runs her official fan page.