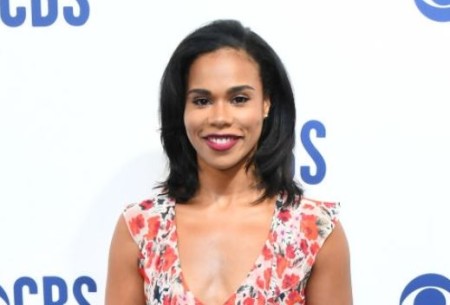 Roxy Sternberg is a British actress best known for appearing in television series such as Chewing Gum (2015), Mars (2016), and Emerald City (2016). Currently, she portrays the role of Special Agent, Sheryll Barnes in the CBS crime drama series, FBI: Most Wanted.

Roxy was born on April 20, 1989, in London, the United Kingdom. The 31-year-old actress has a mixed background. Her mother is from Uganda, while her father belongs to a Polish-Russian ancestry. Therefore, she prefers to call herself Y.B.J (Young, Black, and Jewish).

Roxy has been active in the entertainment industry since 2012. Roxy graduated with a degree in drama and theater studies from Royal Hollywood, University of London.

The lovely actress is very secretive when it comes to her personal life. Roxy rarely interacts with her followers as she has a Facebook account only. She is not active on Instagram and Twitter. However, Roxy is in a romantic relationship with her boyfriend named Flax.

Roxy and her partner, Flax, appear on social media together. The couple can be seen enjoying vacations and taking part in social events. It seems that Roxy began dating her lover since 2016. They have been together for nearly five years as of now.

It is not known when Roxy and Flax will get married, but with a growing career, the actress might be focused on her career. Also, Roxy has managed to keep details of her personal life behind the spotlight. So it is not known if she dated other guys in the past.

Roxy Sternberg's growing popularity has led her to earn a decent income from her acting career. She has a net worth of $300,000 as of 2020, which is similar to Zeeko Zaki, who plays a leading role in CBS series, FBI. Roxy earns an average salary of $38,000 per episode as starring on a television show.

Roxy has appeared in a few full length and short films as well. To date, she has yet to deliver a blockbuster movie. However, Sternberg is doing well on television, and she has further upcoming projects also.

Roxy began her acting career with small roles. Her early television credits include 'Phone Shop,' where she played Monique; 'The Tunnel,' where she played Sam Peters. Likewise, she appeared in 'Law & Order: UK' as Alice Edwards and in 'Badults' as Giff.

Watch Roxy Sternberg in an interview!

Some of Roxy's memorable performances were in NBC's 'Emerald City,' AMC's 'Into the Badlands,' BBC's 'Famalam,' and Sony's 'Absentia.' Currently, she can be seen playing Special Agent, Sheryll Barnes in the CBS drama, 'FBI: Most Wanted.'

Similarly, her movie credits include, 'It's A Lot,' '18 Years Ago', and 'Le Fear II: Le Sequel.' Some of the renowned female British actors are Sharon Maughan and Sylvestra Le Touzel.