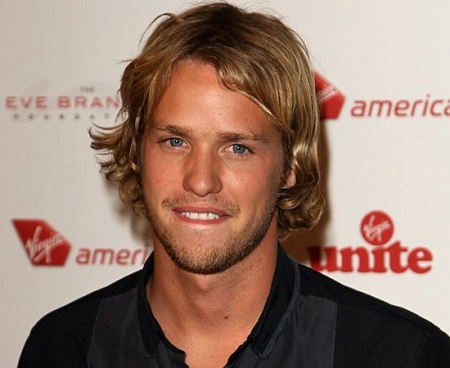 Sam Branson is a British actor, producer, and social media star, probably known for his roles on Superman Returns (2006), Famous and Fearless (2011) and The Alan Titchmarsh Show (2007). He further is also known as the son of British investor, business magnate, author and philanthropist, Richard Branson.

The actor was born in 1985 to the mother, Joan Templeman (age 72 years) and father, Richard (age 69 years) in Blackheath, London, United Kingdom. He holds British citizenship and belongs to white ethnicity. Further, he grew along with her siblings, Holly Branson and Clare Sarah Branson.

As of now, Sam Branson shares a strong conjugal life with his life partner, Isabella Calthorpe. Well, she is an English socialite, actress, and model who has also starred in films Stage Beauty and How to Lose Friends & Alienate People.

The lovebirds who are are mid in the '30s tied the wedding knot on March 6, 2013, in front of family members and close friends. The romantic event was held in South Africa at Sam's father, Richard's private safari lodge near Kruger National Park.

Also, York's Princess Beatrice and York's Princess Eugenie attended Branson and Calthorpe's big day at the private game reserve of Sir Richard. And this couple 35 and 39 have been joyfully loving their married life together for five years now.

The famous business magnate, Richard's son Sam and his daughter-in-law Isabella welcomed their firstborn child together in February 2015, two years later of tying the knot. The duo's first baby is a daughter whose name is Eva-Deia Branson. Eva's age is 4 years as of 2019.

Shortly after becoming a dad for the very first time, Sam shared the heartfelt post on the official website, Virgin. He stated;

"It's strange looking at something that you know is the most important thing in the world to you but you haven't even touched them yet. It took that skin on skin for me to really connect with her and from that moment I have fallen more and more in love with her each second."

In addition to his dating record, he has been also attached with the name, Natalie Imbruglia. Though, they shared each other's company for a short time period, they were seen in public events.

Natalie has been associated with several names of the entertainment industry. Her dating records will surely amaze you. Some of the names are Johnny Borrell, Chris Martin, David Schwimmer and much more to mention.

Net Worth of Branson Family?

Sam Branson is a British actor who has made a fruitful amount from his acting career as he has given his performances in several TV shows and films. Although he hasn't shared his exact amount of net worth, it is believed, it is around $2 Million as of 2020.

And Richard is estimated to have supervised some 500 companies with more than 60 businesses in the portfolio of Virgin. He continues to invest money with new ideas in the expansion and development of Virgin. Some of the well-known firms under Virgin Group are Virgin Media, Virgin Australia, and Virgin Atlantic.

Spending lots of money on what?

Well, Richard is focused on philanthropy, devoting 80% of his time to Virgin Unite, the Virgin Group's charitable arm. He and the Virgin Group finance the non-profit overheads and expenses. The charity funded a number of initiatives including The B Team, The Carbon Space, The Elders, and Oceans Unite.

Similarly, he's investing time and money into the community. In 2007, he gave $25 million to scientists as part of the Earth Challenge who were able to find ways to save the earth from climate change.

The businessman Richard who turned 69 on July 18 has bought many kinds of a private island in many nations. He purchased a 32-meter catamaran in 2009, renamed Necker Belle at Necker Island for about $6 million, a mini-submarine, dubbed Necker Nymph for $547,482.

Age 69, Branson has purchased The Lodge elsewhere in Europe, a ski resort in the Swiss Alps and one-room rentals is around $945 a night and is $89,916 a week. Further, he also owns a resort in Morocco called Kasbah Tamadot which consists of 28 rooms each run for $717 a night.

In 1978, he bought Necker Island in the British Virgin Islands with the worth of $180,000. The rest of Branson's properties are found in Africa including Mont Rochelle, a hotel and vineyard near South Africa's Cape Town.

In addition, one of the richest philontharphy has safaris stuff. Likewise, he owns Mahali Mzuri With a 40-foot infinity pool, and room prices are around $590 a night. And his fourth African house, Ulusaba, located in the Sabi Sand Game Reserve, also offers safari experiences.

Now, talking about his home, Richard owned a beautiful house in Holland Park, London worth $3.3 million. And later the mansion with an underground pool and squash court sold for £55 million or $72.64 Million.

The businessman also purchased a refurbished house in London for about $2,600. This property can also be leased for just a price of $1,000 a week.

The prolific British billionaire and mastermind lived in his Oxfordshire home in Kidlington, England, before settling on Necker Island. How much he paid for it is unclear, but he sold it for $1.78 million to his family.

To move from one place to another, he often use his own private named Falcon 50EX is at the Ogden Airport, which costs around $21 million. Moreover, he owns, Air Craft VSS Enterprise, Necker Nymph - Sub Marine of Richard Branson.

Sometimes, Richard drives a Range Rover and Humber Super Snipe. Some of his cars are Morris Mini Minor, one of the antique cars on the world. In 1948, the Virgin Media owner used to drive The Morris Minor in the previous time.

His one of the most fuel-efficient car is Saab 9-5 BioPower. Additionally, he bought a luxury yacht in the world.

For further updates on British Actor,  stay tuned at marriedceleb