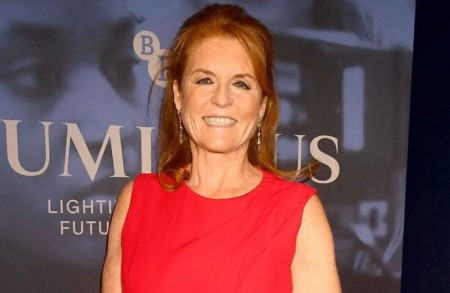 Facts of Sarah Duchess Of York

Body and Relation Status of Sarah Duchess Of York

Sarah Ferguson is known as the Duchess of York as the former member of the British Royal Family. She is the ex-wife of Prince Andrew, Duke of York, who is the second son of Queen Elizabeth II and Prince Philip, Duke of Edinburgh. At present, Sarah is involved in writing, producing film, and television shows. Her nickname is Fergie.

The former Duchess of York was born as Sarah Margaret Ferguson on October 15, 1959, at London Welbeck Hospital. She was born to parents, Major Ronald Ferguson and his first wife, Susan Wright.

Sarah is a descendant of King Charles II of England. She is the great-great-granddaughter of the 6th Duke of Buccleuch. Sarah's parents divorced when she was 15. Afterward, her mother married a polo player.

Likewise, her father married a woman named Susan Deptford. Further, Sarah has three paternal half-siblings named Andrew, Alice, and Elizabeth. Her father died in 2002, while her mother passed away in 1998.

They began a romantic relationship after a party held at Windsor Castle. Do you know Andrew's sister-in-law, Diana, Princess of Wales, had a hand in matchmaking the couple?

Prince Andrew was born on February 19, 1960, and is a member of the British royal family. He is currently eighth in the line of the succession t the British throne as of July 2020.

The couple got engaged on March 17, 1986, and Andrew gave Sarah a Garrard ring, which had a Burma ruby surrounded by ten drop-diamonds. Similarly, the ring had a mounting of eighteen-carat white and yellow gold.

The royal household of the United Kingdom was the in-charge of Sarah and Andrews' wedding ceremony. As per the royal tradition, the couple's wedding ring was crafted from Welsh gold, which is a rare and highly-prized gold. On their marriage day, Sarah wore an ivory-silk wedding dress, while Andrew wore a ceremonial naval lieutenant attire.

Around 30,000 flowers were used for the decoration of the abbey. In conclusion, Sarah and Andrew's wedding ceremony was spectacular, as most of the royal weddings. For their honeymoon, the couple boarded a royal jet and spent their five-day honeymoon at the royal yacht, Britannia, in the Atlantic.

Their wedding was broadcast worldwide on television and radio in several countries. Further, as per BBC reports, around 500 million television viewers watched the wedding of Sarah and Prince Andrew.

Sarah and her ex-husband Andrew share two children. The couple welcomed their first daughter, Beatrice, on August 8, 1988. During her pregnancy, Sarah suffered from high blood pressure and excessive water retention. Likewise, their second daughter, Eugenie, was born on March 23, 1990.

Princess Beatrice is now 31 years old. She is ninth in the line of succession to the British throne. Beatrice is currently married to a British property developer, Edoardo Mapelli Mozzi.

Meanwhile, Princess Eugenie is 30 years old. She is tenth in the line of succession to the British throne. She is currently married to a British wine merchant, Jack Brooksbank.

The Duchess and Duke of York's marriage, separation, and divorce attracted much attention from the media and the public. So, why did they separate? Well, the reason behind the couple's separation includes a series on misfortunate events.

Prince Andrew served in the Royal Navy as a helicopter pilot. He used to stay away from the family and home for longer periods. Therefore by the end of 1991, their marriage was in trouble as Sarah was unable to deal with her husband's absence.

As a result of drifting apart, the couple announced their separation on March 19, 1992. There was a certain hope among the family members and the public about their reconciliation. However, in August 1992, the British tabloid Daily Mirror published photographs of Sarah and John Bryan. The photos showed John, an American financial manager sucking the Duchess's toes as she sunbathed topless.

Afterward, Sarah received wide public ridicule along with the estrangement from the British royal family. Eventually, in May 1996, Sarah and Andrew announced their mutual divorce. Despite their split, the former spouse is still good friends as of now.

Sarah, Duchess of York, a British Royal figure, has a net worth of $2 million as per celebritynetworth. As per Sarah, she received $19,183 (£15,000) a year as a divorce settlement. However, as per reports by The Sunday Telegraph, Sarah received a stunning settlement of $3,836,790 (£3 million).

In the mid-1990s, Sarah's bank account had a $5.372 million (£4.2 million) deficit, which she cleared by working in the U.S. Besides, the Duchess had been involved in several financial troubles.

On the other hand, Fergie's ex-husband, Prince Andrew, has a net worth of $45 million. He has a valuable real estate portfolio and possesses several luxurious mansions. Further, the richest British royal family member is without a doubt Queen Elizabeth II, whose net worth is over $370 million.

Fergie has appeared in several television and movies as well. She made a cameo in the popular American sitcom, Friends, which starred actors such as Lisa Kudrow and Matthew Perry. Also, Sarah has been the substitute host for CNN's Larry King Live.

Sarah served as the producer in the 2009 film The Young Victoria. She revealed her plan to produce a documentary about Princess Louis of Saxe-Gotha-Altenburg.