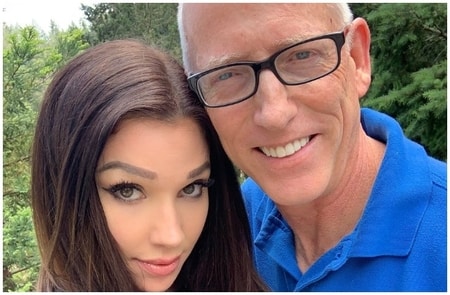 Scott Adams, the sixty-two-year-old cartoonist, and the author found his love in thirty-one-year-old model Kristina Basham. Scrolling through Kristina's social media, we can see the couple is very much in love with each other.

Scott, most famously known for his sarcastic writing and cartoons, was previously married to a woman named Shelly Miles for eight years. Adams new found love has met with lots of criticism from Liberals who do not quite like Scott for his support towards US President Donald Trump. Know more about his relationship status in the article below.

According to online tabloids, Scott is currently dating the Instagram model Kristina. The couple probably started dating each other in 2017, but according to Kristina's twitter, the pair started posting pictures in 2018.

After the announcement via social media that the couple is now dating, many people are posting hate comments based on jealousy. Not just that, Adams's support to Donald Trump over Hillary Clinton also caused friction between Scott and Liberals.

They also are posting hate comments on the internet, but the pair does not seem to care about haters. Kristina and Scott are enjoying each other's company are very deeply in love. According to Basham's Twitter, the duo looks head over heels in love.

Kristina is more than a Pretty Face

The thirty-one-year-old model is not just eye-candy. She is a musician, and as per her Instagram profile, Basham is going to be a neuroscientist in the future. Kristina is very good at playing the piano and violin, and you can watch her on her Twitter videos she post.

Her father played the Accordion, and probably that's where she gets this that talent of music. Kristina started modeling at a very young age when she was first spotted at a restaurant by a modeling agency. After that, she went on to work with brands like Disney, Emirates Airlines, Nissan, and Top Shop, to name a few.

In addition to that, Kristina is a businessperson too. She owns an online website where she sells her unique fashions like Pants, shoes, and jackets. Basham, furthermore, opened up a bakery by the name of LeVasseur Confectionary in San Francisco.

Apart from all of this, many of her followers hover around her Instagram. She has around 4.1 million followers, just like Jojo Babie and Sophia Beverly.

Scott booked a yacht where the ship's captain married them in a non-denominational ceremony. For the auspicious day, nearly 150 guests, including friends and family members, attended the wedding ceremony.

From his first marriage, Scott became a father to two children. He has a son and a daughter who he shares with his former wife. Scott separated from his wife in 2014. Kristina, on the other hand, was also previously married.

The detail about Kristina's first wedding is a secret. From the marriage, she gave birth to two daughters, Hazel and Marin Hilsabeck. The identity of her first husband, however, is kept a secret.