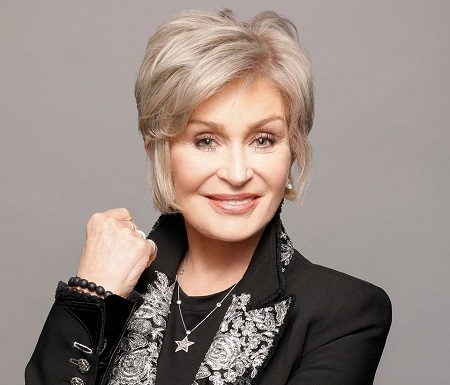 Sharon Rachel Osbourne was born on October 9, 1952, in Brixton, London, United Kingdom. She is the daughter of late music promoter and rock and roll entrepreneur, Don Arden (1926–2007), and Hope Shaw (1916–1999). Further, she has a brother David Adren and two half-siblings, Richard and Dixie Shaw, from her mother's side.

Tied The Knot With Ozzy Osbourne In 1982

Aged 67, Sharon is happily married to heavy metal singer-songwriter Ozzy Osbourne, aged 71. They met for the first time while he was collaborating with the Black Sabbath band in the late-1970s.

At that time, Sharon was a junior assistant for her father, Don who was working as a manager for the band. When the Black Sabbath's lead vocalist, Ozzy left the band, Sharon became his manager and helped him to pursue as a solo artist in 1979.

Then, the duo started dating and became engaged after Ozzy proposed surprisingly. The couple then walked down the aisle in an intimate ceremony on 4th July 1982 in Maui, Hawaii.  At their big day, the bride Sharon wore a white while tulle applique off-the-shoulder ball gown with long sleeves. While the groom Ozzy donned in a slim white suit, tied up with a white bow tie.

After ringing the wedding bells, the couple is living a blissful life. Back in 2020, they completed their 38th wedding anniversary on the 4th of July. They also attended the 2020 Grammy Awards ceremony on 26th January 2020.

She is a Mother of Three Adults Children

Sharon then gave birth to their second daughter, Kelly Osbourne on 27th October 1984. And their youngest son Jack Osbourne was born on 8th November 1985. Three of their children are following their passion for the arts of acting as well as in the music.

More to that, the entire family appear on the reality TV show, The Osbournes on MTV since the early 2000s.

Rock and Roll Hall of Fame star, Osbourne was previously committed to his now-estranged wife, Thelma Riley. The two had their first encounter at a nightclub, the Rum Runner in Birmingham, where Thelma was a waitress in 1971.

Then the duo began dating after spending quality for a moment and shortly they became engaged when Osbourne proposed her. The couple then exchanged their wedding vows in July 1971 in an intimate ceremony.

However, they ended their marital union because of Ozzy's drug and alcohol abuse and filed for divorce in 1982. They then finalized their divorce in the same year with settling down the spousal and child support for Thelma and their two children.

Working as a music manager, promoter, and reality TV personality, Sharon has an accumulated a huge amount of fortune. As of 2020, she shares an impressive net worth of $220 million with his long term musician husband, Ozzy Osbourne.

Further, Osbourne reportedly received nearly $12 million for her role in her own TV show, The Osbournes. It was premiered on March 5, 2002, on MTV. Apart, she grossed over $20 million from the summer Ozzfest tour by selling ticket which had reached $150 in 2007.

Ozzy is famous for being the vocalist of the heavy metal band Black Sabbath, formed in Birmingham in 1968. The band members are drummer Bill Ward, the bassist Geezer Butler, guitarist Tony Iommi and vocalist Ozzy. Together, they release genres such as Black Sabbath (1970), Paranoid (1970), and Master of Reality (1971).

Throughout his career, Osbourne has sold over 100 million albums. His hit albums include Speak of the Devil (1982), No Rest for the Wicked (1988), and No More Tears (1991). Apart, Sharon and Ozzy bought 11,000 square feet of home at the top of a cul-de-sac. The apartment which contains six bedrooms and ten bathrooms' price is listed at $12.999 million on the market.