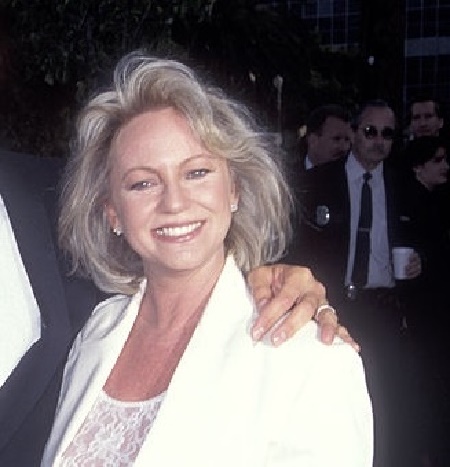 Sharon Thomas is an American actress who has played a variety of roles in filmography including Grand Jury (1976) as Jenny Allen, The Principal (1987) as Kimberly and among others. In addition to that, she is also renowned as the wife of Christopher Cain, American screenwriter, actor, director, and singer.

Born on June 3, 1946, in Acworth, Georgia, United States, Sharon holds American citizens and is of white ethnicity. Not much known about her parents and background to the media. But do you want to more about her marital relationship? Then, read along.

Who is Sharon Thomas's Husband?

This beautiful woman is happily married to her long term partner, Christopher Cain, for about 50 years. They tied the knot in the year 1969 among their loves ones and still going strong with no rumours of separation.

From their relationship, Sharon and Christopher gave birth to their biological daughter, Krisinda Cain Schafer on 21 June 1973. Plus, Director Christopher adopted the two boys Roger Cain and Dean Cain from Sharon's previous marriage to Roger.

Roger and Dean are musicians along with Krisinda. Also, Sharon's daughter Krisinda Cain got hitched with Jeff Schafer in 2007.

Before Cain, the actress who played the role of Fred in Cuba Crossing (1980), was once married to her first husband, Roger Tanaka. Likewise, Roger is a former U.S. serviceman by profession.

Sharon Became a Grandmother in 2000

For the first time on 11 June 2000, actress, Sharon became a grandmother. Her son Dean and his ex-girlfriend Samantha Torres, a playboy pal, welcomed his son named Christopher Dean Cain.

In reality, he named his son after Christopher Cain, his adoptive father. Host to Ripley's Believe It or Not Has full custody of the son and raises him as a single parent since 2011.

In addition to this, TV personality was engaged in 1997 with the late American country music singer Mindy McCready. They were too close to celebrating their union, but after a year, they were unable to continue their relationship and split their ways. Born on February 17, 2013, Mindy had suicide on February 17, 2013.

In the past, Dean was also confirmed to have dated Teri Hatcher during 1993, Ami Dolenz (1991-1992) and Gabrielle Reece, a volleyball player.

Moreover, during his high school, Dean had a love affair with actress Brooke Shields from 1983-1987. Later, he revealed that he took her virginity.

American actress, Sharon Cain maintains a handsome net worth of $500,000 as of 2020. She makes most of her income from her acting job.

Moreover, in the United States, an actor/actress's average income earns $56,502, and her salary is calculated at the same sum. She also appeared as Kimberly in The Principal (1987), starring Louis Gossett, Jr., who has a net worth of $3 million.

On the other hand, as of early 2020, her son Dean Cain has a net worth of $6 million. He made that fortune as an American actor, producer, host of television shows, and former football player as well as.