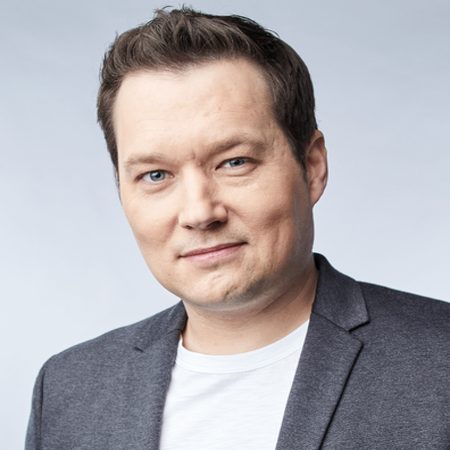 Steve Burguiere is an American radio producer and personality, executive producer, writer, and television host. He is better known by the name "Stu". Moreover, he is famous as a head writer of The Glenn Beck Program and host on Blaze TV. Besides, he is also a host of the show The Wonderful World of Stu. Steve also works as a co-host in the show Pat & Stu on The Blaze weekdays at Noon ET for 2 hours. Currently, Steve is working as a comedy/news program host in programs like Stu Does America, on Blaze TV, Blaze Radio and Podcasts.

The Podcast and American radio producer, Steve Burguiere was born on February 9, 1976, in Tarrytown, New York, USA. However, he grew up and raised by his family in the state of Connecticut. Similarly, Burguiere is an American by nationality and belongs to white ethnicity. After completing his bachelor's degree, he joined as an intern at the New haven radio station KC101.

Who Is The Beautiful Wife of Steve Burguiere?

Well, Steve, 44, is a married man. He is married to his co-worker and girlfriend turned wife, Lisa Paige. Moreover, he met his future wife while working at KC101. Later, they found a special attachment between them and felt deeply in love with each other. Furthermore, the love birds walked down to the aisle and tied the knot in a private ceremony.

However, the couple hasn't shared information regarding their wedding date and where it was held yet. Since after their marriage the duo is living a happy married life. It seems that they are together for more than 16 years and enjoying their happy marital life.

There are no signs of their extramarital rumors and divorce until now. Besides, we can often see them hanging out and enjoying their happy married life as a husband and wife. On the other hand, the couple is also blessed with two lovely children from their marriage.

The Stu Does America host on The Blaze TV, Steve is currently enjoying a happy fatherhood life with his two lovely children from long married life. The couple became parents for the first time with a baby boy, Zach Burguiere, born on July 18, 2011.

Apart, the couple also shares a beautiful baby girl, Ainslee Burguiere as a second child from their marriage. But, her date of birth is still unknown. However, the couple is too protective of their children's physical and psychological growth. As of now, Steve is living a happy married life with his wife and two children in America.

Net Worth & Salary of Steve Burguiere

Steve Burgiuere has earned a hefty amount of net worth as an American radio producer and personality, executive producer, writer, and television host. Furthermore, his estimated net worth is around $3 million as of 2020. However, his exact net worth figure is yet unavailable. According to payscale.com, the average annual salary of TV or radio host ranges from $58,840.

Apart, he also has his own YouTube channel Stu Does America with 27.1K subscribers. According to the SocialBlade, his channel monthly earning is $64-$1K and yearly earnings of $770-$12.3K. On the other hand, he also worked as a head writer of The Glenn Beck Program from which he also earned a hefty amount of money. As of now, he is living a healthy and wealthy life with his family.