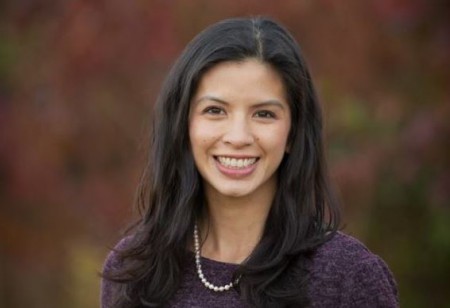 Ylan Mui is one of the prominent female journalists who is currently working as a correspondent and contributor for the leading business network CNBC. She joined the network in February 2017 as a reporter based at the station's bureau in Washington, D.C. Mui, along with her colleague, Leslie Picker's reporting appears on CNBC's digital platforms.

Previously, Mui spent nearly 15 years at The Washington Post serving as the White House economic policy reporter, financial/consumer reporter as well as an education writer. Apart from having a profitable career, Mui also has a blissful married life.

Happy Married Life For Over A Decade

The 38-year-old CNBC correspondent, Mrs, Ylan Mui is happily married to her husband, Adam McClintock. The couple tied their wedding knot on August 6, 2008, in an intimate marriage ceremony.

Mui and her spouse, McClintock has crossed 11 years of marital solidarity, and still, the lovebirds look as fresh as a young couple. Yolan once revealed that despite both having hectic schedules, the two manages to go on a date more than four times a year.

Ylan and her husband lived in Fairfax County, Virginia, around November 2016. Currently, she, along with her spouse and their kids, reside in Washington, D.C.

The beautiful reporter, Ylan Mui, is a mother of two adorable children, a girl, and a boy. On March 9, 2012, Mui shared a picture on her Facebook account showing a baby bump and asking suggestions for then to-be born baby girl.

On July 20, 2012, Ylan gave birth to a healthy daughter, Eleanor Tam McClintock, who weighed 6 lbs and 12 ounces. She expressed her joy to her followers via social media.

The details about Mui's second child is, however not known. She hasn't revealed the birthdate of her baby boy, neither she shared a picture after her son was born. On December 1, 2015, Mui posted a photo along with her husband, daugther, and a son. Therefore, her son might have born in early 2014.

As a correspondent and contributor to CNBC, based in Washington, Ylan Mui enjoys a net worth of $1.5 million as of 2019. She has nearly 20 years of experience working in the field of journalism. Some of the CNBC female correspondents who earn a decent income are Julia Boorstin and Kayla Tausche.

Most of her wealth came from her work at The Washington Post, where she worked for 15 years. For the Post, she worked as White House economic policy reporter, financial and consumer reporter. During that time, Mui earned an annual salary of over $250,000.

Currently, Ylan works as a contributor and correspondent for CNBC, and her salary is around $98,000 per year. Therefore, she has a stable financial status.

Before CNBC, Mui worked for The Washington Post for nearly fifteen years. She covered the Federal Reserve and the macroeconomy, subprime lending, consumer finance, retail, and education.

Additionally, she reported on major international stories, including the Greek financial crisis and Brexit. Likewise, she also covered national disasters such as the BP oil spill and Hurricane Katrina.

For your information, Ylan began her career as a receptionist and obituary writer at The Times-Picayune in New Orleans.

Ylan Mui was born in 1980 in New Orleans. Her parents migrated to the United States from Vietnam after surviving the Vietnam war. Mui's father was a medical doctor, while her mother used one of his clinic rooms to run a spa. Mui has a mixed heritage.

Mui went to St. Mary's Dominican High School for her primary education. She received a Bachelor's degree in communications along with biology and philosophy from the Loyola University New Orleans.

To know about your favorite News Correspondent, follow Married Celeb!!!