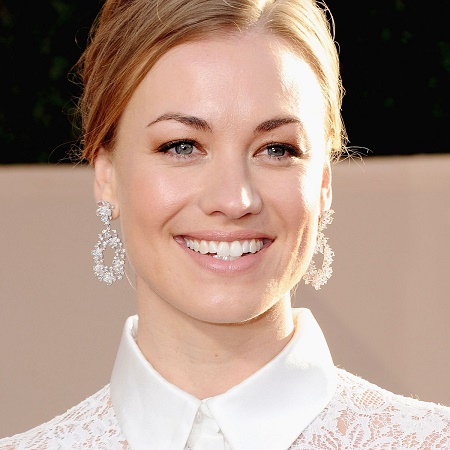 The famous Australian actress, Yvonne Strahovski, came to people's attention after starring as Sarah Walker in the NBC spy drama series Chuck between 2007 to 2012. Added to that, she is also widely famous for her roles includes Kate Morgan in the Fox event series 24: Live Another Day (2014), and Hannah McKay in the Showtime drama series Dexter (2012–2013).

Yvonne Jaqueline Strzechowski was born on born 30 July 1982 in Werrington Downs, Australia. Her father, Piotr Strzechowski is an electronic engineer whereas mother Bożena Strzechowski is a lab technician. As per her citizenship, she is Australian and is of white ethnicity. She studied at Santa Sabina College, and in 2003 graduated from the University of Western Sydney.

Yes, the beautiful actress who was nominated for a whopping 11 Emmys is no more single. On the red carpet at the 2017 Emmys Awards on Sunday, the 37 years old Yvonne revealed that she is secretly married.

'Handmaid's Tale' Star tied the knot to her six-year-old boyfriend, Tim Loden at a private function. According to their statements, they were married in summer 2017 back in Northern California. Apparently, the two longterm got hitched privately under all of our noses and the news was so shocking for everyone.

" But we had a great time, we all made it through, we all did some dancing at the end of the night, it was fantastic", Strahovski said with E! News. Before walk down the aisle, Yvonne and Loden enjoyed their love romance for nearly six years. But, the two have maintained their relationship and bond surprisingly low-key and secret until 2017.

Before Tim, the 176 cm tall actress was in a relationship with Australian actor Matt Doran from 2006 to 2007. Further, she also dated  American writer, Josh Schwartz, 43.

Welcomes a First Born Child in 2018

Yes, Yvonne, who stars as Emily McKenna in The Predator (2018) has become a mother for the first time. On October 16, 2018, she announced the news of her firstborn through Instagram post posting the cuddling black-and-white photo of mother and son, William.

The new mom captioned  "My heart has melted into a billion pieces a thousand times already,  We have been blessed with the greatest joy of our lives, our baby boy".

Back in May, Strahovski revealed that she and her partner Loden are expecting their first child together. She made an announcement by sharing a baby bump picture on Instagram, saying, “I am very excited to finally be able to share my special news". She continued: " I’m going to be a Mom and So very exciting to watch & feel this little Peanut growing every day!”

What is Yvonne Strahovski worth?

As of early June 2020, Yvonne Strahovski holds an impressive $12 million net worth which is alike to Elizabeth Warren and Carey Lowell. She has earned her total fortune throughout her professional acting career as she performs on both TV and film screen.

Not only acting but Strahovski also makes fair amount from her modeling gigs and endorsement deals. She is photographed for popular Magazines like Jones Magazine Australia, Fashion Magazine, Glamour Magazines, and among others. She further is signed by Paradigm Talent Agency and Sue Barnett & Associates.