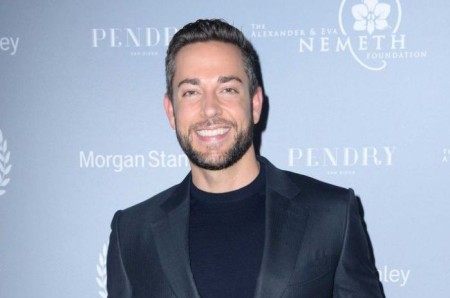 Zachary Levi is an American actor and singer who rose to stardom after appearing in the 2019 blockbuster superhero film, 'Shazam!' Levi was previously known for his role Chuck Bartowski in the series, 'Chuck' for which he won the Teen Choice Award. Likewise, Zachary has appeared in the Marvel Cinematic Universe movies 'Thor: The Dark World' and 'Thor: Ragnarok.'

Zachary Levi Pugh was born on September 29, 1980, in Lake Charles, Louisiana, the United States. He is 39 years old as of 2020. Levi was born to parents Susan Marie (mother) and Darrell Pugh (father) and has Welsh ancestry. At age six, Levi began performing lead roles on stage at the Ojai Art Center.

The tangled actor was previously married to Melissa (Missy) Peregrym, a Canadian actress and former fashion model. The two tied their wedding knots in a secret ceremony in Maui, Hawaii, on June 16, 2014.

The couple reportedly dated for ten years before marrying each other. Unfortunately, just less than one year, Levi and Peregrym shocked their fans by divorcing in April 2015. However, the court documents showed their separation date as December 2014. Therefore, Levi's marriage with Melissa lasted for only five months.

Missy wanted to separate from Levi as she claimed he was having affairs with other women. Neither of them asked for spousal support, and their divorce was finalized in a calm manner.

Afterward, Levi stayed single, and he is not dating anyone. However, Missy married an Australian actor, Tom Oakley, in December 2018. They have a son named Otis Paradis (b: March 2020). Further, Zachary has dated Caitlin Crosby and Yvette Nicole Brown in the past.

Zachary Levi has a net worth of $12 million as per celebritynetworth. He is a talented actor and singer who has been active in the industry since 2001. Levi is a part of several successful television shows and movies. Take a look at some of his films Box-Office Collections.

Zachary earns a substantial amount of money from his television roles as well. While he was a regular on Chuck series, Levi charged around $90,000 per episode. His annual earnings from television range somewhere between $82,000-$232,000.

Besides acting, Levi is a sports car and motorbike enthusiast. He owns a 2009 Nissan GT-R, whose cost is around $80,000. Similary, Levi is the founder of a company called The Nerd Machine. He is an ambassador of a mental health charity called Active Minds as well.

Talking about the residence, Zachary lives in a 75-acre cattle ranch located in Austin, Texas. Previously, he owned a $1.399 million worth home in Studio City, L.A.

Watch the official trailer of Shazam!

Further, when Zachary's spandex costume photos were leaked, the internet troll criticized him for wearing a fake muscle suit. However, Levi proved them wrong by posting a shirtless picture of him from the gym. The movie was a critical and commercial success. Likewise, the sequel will be released in 2022. Actors such as Grace Fulton and Marta Milans were the part of the first franchise.

Unlike his acting career, Zachary pursues music as a hobby. He is a talented singer, but ti date hasn't released any full-length album. For the soundtrack of the movie, Tangled, Levi sang "I See the Light" with co-star Mandy Moore. The song was nominated for the Best Original Song at the Oscars.

Moreover, Levi has also been a guest member of Band from TV that is made up of actors from various American television shows.