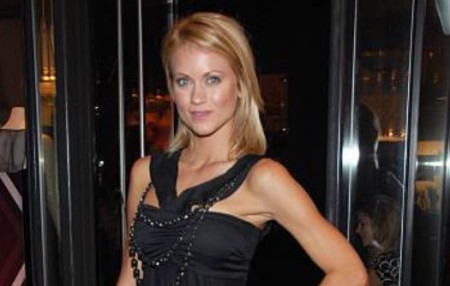 Amber-Marie Seyer is a well-known actress who is also a former Miss Missouri. She has appeared in films such as The Change-up, It's Not You, It's Me, and many others. However, she gathered media attention after tying the knot with a former baseball pitcher and musician, Barry William Zito.

The popular celebrity wife, Amber, was born on April 14, 1986, in Oran, Missouri, the USA. Likewise, her zodiac sign is Aries. Her ethnicity is Caucasian, and she holds an American nationality. Rather than her bio, fans, and followers of Amber wants to know about her personal life. If you are also curious to know about it, then read the article to the end.

Amber is happily married to her long-time boyfriend turned husband, Barry William Zito, who is a former professional baseball player. Not to mention, he has played 15 seasons in Major League Baseball (MLB) for the Oakland Athletics and San Francisco Giants, where he competed against players like Chris Shaw and Brandon Drury. The duo dated for a year and got engaged in April 2011.

Unlike other couples, this couple didn't take much time to get married, and they exchanged wedding vows on December 3, 2011, in a private marriage ceremony. Zito applied for a marriage license at the Marin County Clerk's office on November 18.

At that time, the clerk was Joyce Whitney, and he asked him, "If he wanted a confidential one." Zito replied, 'no,' "Just give me a public one; I'm over myself."

For now, the couple is living a peaceful life, enjoying their 9th wedding anniversary without divorce rumors and controversies.

How many kids Amber and her spouse has?

Not only is the duo cherishing their marital life but also has responsibilities of a father and mother. Well, Amber and Barry have three children. Their first son, named is Mars, was born in July 2014. As of now, he is six years old and must be attending elementary school.

Later in May 2017, the pair adopted a second child, a son named Mercer Joseph Zito. Their second biological son and third child of the duo was born on February 22, 2020. Barry announced the birth of his son via social media. He and his wife, Amber, named their baby, Rome.

As an actress, Amber successfully accumulated a decent amount of money from her career. Seyer's net worth is $300,000 as of 2020. She was a former Miss Missouri as well. Being a titleholder of a reputed beauty pageant, she must have involved in promotional works and commercials. So, she must have added a couple of thousands of dollars from it.

As an actress, she has starred in many box office hit movies and series. Some of them are The Bold and the Beautiful, where she appeared alongside Tracy Melchior, Starting as Amber, the actor, and The Change-up. The average income of a performer and actor/actress is $56,000 per year.

Being a titleholder and well-known actress, she might be earning over $90,000 per year. Apart from her winning and luck, her partner, Barry's fortune, is around $60 Million, which he gained through his successful career in MLB.

Stay Updated With Us: MarriedCeleb To Know More About Actresses