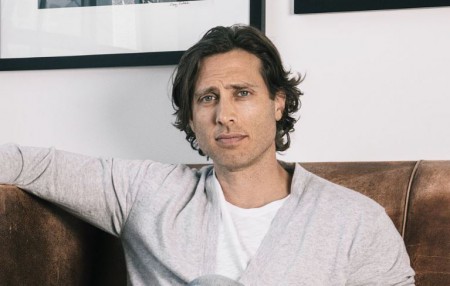 One of the prominent television personality, Brad Falchuk is the winner of AFI Award in 2010 and 2011. He is an American television writer, director, and producer best known for co-creating the comedy-drama tv series, 'Glee.'

The executive producer for the tv series, 'Nip/Tuck,' Falchuk is enjoying his personal life with actress, Gwyneth Paltrow. The couple who married in 2018 has an extravagant lifestyle. He was previously married to Suzanne Bukinik.

The 48-year-old, television producer exchanged his wedding vows with actress, Gwyneth Paltrow on September 29, 2018. The couple tied their wedding knot in an intimate ceremony in front of families and guests. Some of the guests included Cameron Diaz, her husband Benji Madden, Jerry Seinfeld, Rob Lowe, and Robert Downey Jr.

Their wedding venue in the Hamptons, New York, on Long Island is the same place where renowned actress Martha Stewart owns a luxurious home.

Falchuk and Paltrow kept their nuptial ceremony private and small. However, Paltrow shared some glimpses of her big day on Instagram. At the wedding, Paltrow wore the A-line gown covered in lace, and it featured an open back. Meanwhile, Falchuk wore gray Tom Ford suits which perfectly fitted him.

The pair made Chef Mario Carbone cook at their wedding because they had their first date at one of Carbone's restaurants. The floral arrangements from the wedding were given to Repeat Roses, an organization that uses donated flowers to decorate hospitals and medical centers.

Recently on September 28, 2019, Gwyneth celebrated her 47th birthday with Brad in New York City ahead of their wedding anniversary. The couple is finally moving in together despite being married for over a year.

How did the romance begin?

Falchuk is the co-creator of Glee along with Ryan Murphy. At the time, Paltrow was a guest star on the show as substitute teacher Holly Holiday. Onscreen, her character's love interest was Will Schuester; offscreen, she and Falchuk’s relationship was going from professional to romantic.

The lovebirds were seen spending time together in public, including Italian vacation in July 2015. Their relation became officially public in September 2015 when Falchuk posted a selfie on Instagram with the caption: "My date and I #screamqueens."

Rumors of the pair's engagement started to swirl early, but Paltrow Kicked off the new year with a cover story of her engagement on January 8, 2018.

Both Falchuk and Paltrow were married in the past

Brad (48) and Gwyneth (47) were married in the past before. Brad was first married to a television producer, Suzanne Falchuk in 1994. The former couple shares a daughter, Isabella Falchuk and a son Brody Falchuk. Suzanne, however, filed for divorce in 2013 and then the couple separated.

On the other hand, Paltrow was married to Coldplay's singer, Chris Martin from 2003 until 2016. Martin and Paltrow eloped in 2003, and they share two children; a daughter named Apple and a son named Moses.

Just for the information, Paltrow was also involved with actor Brad Pitt and Ben Affleck in the past. Meanwhile, her ex-husband, Martin is currently dating the Fifty Shades of Grey actress, Dakota Johnson.

Meanwhile, Falchuk's spouse, Paltrow, has a net worth of $60 million. The primary source of her income is acting and business ventures. Her movies have grossed $3.2 billion at the U.S box office and $8.2 billion worldwide.

The American Horror Story executive producer, Falchuk sold his showbiz-pedigreed bachelor pad for $10.6 million in July 2019. The buyer is not a wealthy Hollywood mogul but rather 28-year-old indie singer/songwriter Jesse Jo Stark.

The Glee co-creator listed the house on June 2019 which is located in a super-prime area of Los Angeles. Well, Falchuk bought the house from renown director, Sam Raimi in 2014 for $5.6 million.

Follow Marriedceleb for exciting articles of your favorite celebrities!!!