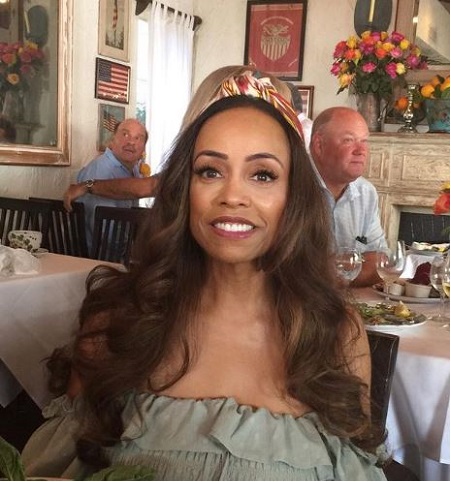 Brenda Harvey-Richie is an American Entrepreneur and Music Composer who is best known as the divorced or first wife of Lionel Richie. He is a Grammy Award-winning musician, composer, actor, television judge and record producer.

He has served as a judge for the singing competition American Idol alongside Luke Bryan and Katy Perry. Today let's talk about Brenda in the following sections.

Brenda and Lionel Were Married For 18 Years

Brenda Harvey, 68, and Lionel Richie, 71, were in a marital relationship for eighteen years. They first met while studying at the same college.

When Riche returned from a tour with a group called the Commodores, the couple started dating. During that time, Brenda was planning to get engaged with another man. But fortunately, they eventually tied the knot on October 18, 1975.

Nearly 18 years later, the college sweetheart Harvey and Lionel's divorce was settled on August 9, 1993. Despite their ugly divorce, the former spouses maintain a cordial relationship and are still in good terms.

During their marital life, they adopted a daughter Nicole Camille Richie, born on 21 September 1981. Her biological parents are Peter Escovedo and Karen Moss.

Peter is a drummer who toured with American singer Lionel Brockman for a period of time. After having issues between Peter and Karen, they agreed to let her move in with Richie when Nicole was three.

Lionel and Brenda officially adopted Nicole, 39, when she was just nine years old. They raised her as Nicole Richie. Today she is a TV personality, actress, and fashion designer. She came to fame after appearing in the reality TV series, The Simple Life, alongside her childhood friend and fellow socialite Paris Hilton.

Further, Richie, the 1.55 m tall, is married to her husband, Joel Madden, a Vocalist. He is a pop-punk rock band
Good Charlotte and UNICEF Goodwill Ambassador. They got married on 11 December 2010 and has two children, a daughter Harlow Madden, 13 and son, Sparrow Madden, 11.

Brenda Was Arrested For Hitting Lionel and His Mistress Diane

From 1986, Richie began dating her second wife Diane Alexander secretly while he was still married to Brenda. But Brenda found about his affairs just two years later. She even found them together in a Beverly Hills hotel room.

Lionel hid the fact by saying that Diane was just a hotel maid. So in June 1988, Harvey-Richie was arrested for hitting her husband Richie and his mistress. She ended up for corporal injury to a spouse, resisting arrest, trespassing, vandalism, and battery(unlawful physical contact).

Lionel Was Married To Diane Alexander

After ending nearly 18 years long marriage with Brenda, Lionel went on to live with his mistress Alexander at her Beverley Hills apartment in 1984. She is a former dancer and fashion designer.

Then the couple welcomed their first child Miles Brockman Richie on May 27, 1994. He is now 26. Lionel and Diane finally exchanged wedding rings on December 21, 1995, in a very private ceremony.

Three years later on August 24, 1998, Diane gave birth to their second child Sofia Richie. Like his previous marriage, Lionel's conjugal life with Diane also proved to be a failure. They got divorced in 2003 after being married for eight years.

The 163 cm tall Brenda Harvey-Richie has an estimated net worth of $900 thousand as of 2021. He has earned her fortune throughout his career as an entrepreneur and music composer.

On the other hand, her husband, Lionel Richie has a net worth of $200 million, as per Celebrity Net Worth. His concerts and music tours are one of the most sold out. During the course of his career, he has sold more than  90 million records worldwide. It makes him one of the world's best-selling artists of all time.

Besides, Richie owns a 28-room Beverley mansion which was built in 1929. The house is built in the Italian Renaissance Revival structure and is worth more than $11 million.

Brenda Harvey-Richie was born on September 2, 1952, in Alabama, USA. She is the daughter of Lucille Harvey and Marshall Harvey. She has a brother named Stephen Harvey.

As per her education, she studied at Southern Normal School and graduated from Tuskegee University with a degree in social work in 1974. So far, she holds American citizenship and is of white ethnicity.