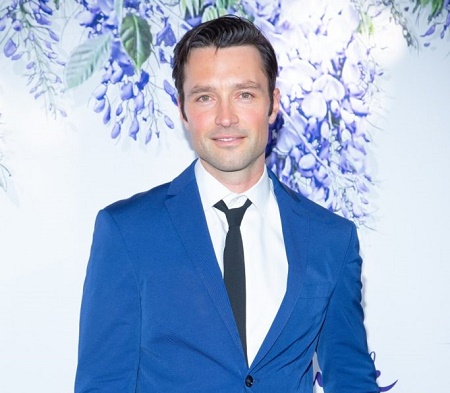 The prominent Canadian TV actor, Carlo Marks became famous after giving a strong performance in the 2013 film, Scarecrow as Eddie. Further, he is known for his roles as Ian Thomas in the 2010 TV series, Pretty Little Liars (2010) and as ‘David Peck’ on Hallmark Channel’s “Chesapeake Shores (2016).

Marks was born on August 24, 1982, in Tofino, Canada. Born to Canadian parents, he holds Canadian citizenship and belongs to the white ethnicity. As per his education, he is a graduate of the University of Victoria and has studied at the Lyric School of Acting.

Has A Girlfriend Since 2017

6 feet tall talented actor has gained a huge number of fans for his outstanding acting skills. Thus, his fans are more excited to know about his relationship and affairs. So, is he dating anyone currently?

Yes, Carlo Marks is reportedly dating his long term girlfriend, Shivani Ruparelia. Scrolling their Instagram post, it seems the pair started their relation since February 2017 and its been 2 years already.

As of now, the 37-year-old actor and his sweethearts, Shivani, share a peaceful love life for nearly three years. The happy couple is leading a fantastic connection so far and likes to travel together in many places. They went on a visit to Indonesia on 28 June 2018.

On the other hand,  Pretty Little Liars' star posted a photo with Blogger, Alanna Duekovich, captioning," Staying grey with my bae ... Oh, what? I thought that meant Best Alanna Ever???".  But in reality, Alanna is a happy momma and wife of Mat.

How much Net Worth does Carlo Marks have?

As a performer, Carlo Marks has earned a hefty amount of money through his acting work. For some TV filmography he has starred like Pure Pwnage, G-Spot, To Be Fat Like Me, Scarecrow, among others.

Marks must have certainly bagged a lucrative paycheck from the show. He has an estimated net worth of $1 million as of early 2020. In addition, he also adds respectable wealth by deals with endorsements and promotional works.

A Canadian actor's average income is about $60,000 per annum, and his pay may fall within the same amount. Thus, Carlo undoubtedly lives a luxurious lifestyle with his family on such a good salary.

In 2005, Carlo made his first credited television appearance after playing the role of Jock in the series Pure Pwnage. He has since continued to feature on various television shows like SGU Stargate Universe (2009), Scarecrow (2013), Crossroads (2014), Angel Falls: A Novel Holiday (2019) and others.

In addition, Marks appeared in the Chesapeake Shores of the Hallmark Channel opposite Meghan Ory and in the American superhero TV show, The Flash, starring Danielle Panabaker. Similarly, he was also included in Paul Reiser's web series Lovebites.

Some of his film credits include Crossroads, The Bone of a Whale, Indie Jonesing and Sex, Awkward Office Encounters and Drugs. Besides this, he frequently works as a member of the Vancouver theater group and made his directorial appearance last summer with "The Dreamer Examines His Pillow" by John Patrick Shanley.