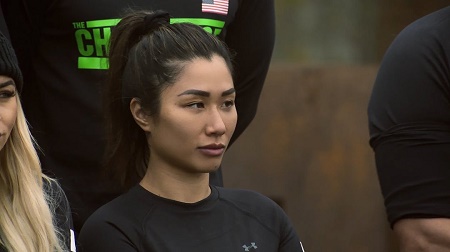 Dee Nguyen is an Australian TV personality who came to prominence for being the cast member of British reality television series, Geordie Shore’s Season 17 as Kyle Christie. She is the winner of the MTV reality competition series, The Challenge: War of Worlds 1 & 2. Also, she is known as the contestant of the MTV reality competition series on The Challenge: Total Madness Prior to that, she has worked as a pole dancer.

She was born on April 20, 1993, in Australia. She holds Australian citizenship and belongs to the white ethnicity. As per her family background, there is no information on the media but her mother does not speak English.

The gorgeous TV star is an unmarried woman reportedly. She appears to be living a happy single life for now without dating any husband. She further is a pretty workaholic, who focuses on her jobs.

However, Nguyen who is 5 feet 3 inches tall has been in a romantic relationship with Rogan O'Connor. The two ended up winning The Challenge 35's entire season: Total Madness, along with Jordan Wiseley and CT Tamburello teammates. But for as long as they split their ways after the show.

Is She Is Fired From MTV's 'The Challenge' For BLM Comments?

Yes, the competition series MTV reality show cuts ties with De. Because of her "offensive" comments, she's made movement about Black Lives Matter and the killing of George Floyd by posting the black square photo for #BlackoutTuesday last week on Instagram. When one person responded: "Wake up! People are dying".

She allegedly replied: “People die every f–king day. U don’t know me or what I do. I suggest you wake the f–k up and get off social media.” Dee also added, “IDK why some of you think I’m anti-BLM. I’ve been saying that since the day I lost my virginity.”

From there, the situation worsened with her feuding with black castmates Bayleigh Dayton and Chris Williams. Chris, who is known as Swaggy C, claimed that Dee had written to him, "Hey make sure you tell Bayleigh to keep me blocked & you still talk bad about me. I'm thinking of storylines for season 36". Swaggy C continued: "Everything is not for f–king clout and drama.

27, Nguyen then was fired from MTV show before ultimately apologizing. As a result of Dee Nguyen’s offensive comments on the Black Lives Matter movement, we have severed ties with her,” a statement posted to the official “Challenge” Twitter account reads.

Nguyen later apologizes for her mistake via a post on Twitter and Instagram."The last 24hrs have made me realized what is important and that is forgiveness,” she wrote on her Instagram post-Tuesday".

Working as a Reality TV star, Dee Nguyen must be earning a good amount of money. As of 2020, her net worth is estimated to be $300 thousand which she earned through her successful career as a TV personality. Other TV personalities like Brittainy Taylor and Tamra Judge also make an immeasurable sum.

Nguyen is currently an MTV reality competition series contestant on The Challenge: Total Madness which was premiered on April 1, 2020. Furthermore, she is Geordie Shore 's former so she will earn approximately £150,000 a season. Also as a winner of The Challenge War of the Worlds 2, she has earned $250,000 reportedly.