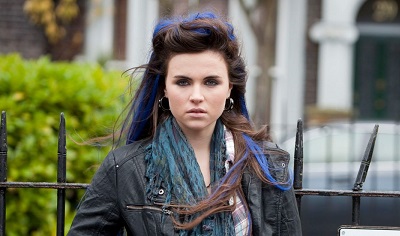 Have you ever watched the TV series BBC soap opera EastEnders? Then you might be near the name Emer Kenny who portrayed the role of Zsa Zsa Carter. Well, she is a British Actress and screenwriter who has established her name in the media industry after hard work and dedication.

Emer Kenny was born on 10 October 1989 as Emer Gwynne Morganna Kenny. Further, she was born and raised by her parents in the North London Borough of Haringey, London, England, where Aimee-Ffion Edwards was also born.

Who is Emer Kenny Married to? Husband & Children

Many people must be wondering whether this good looking English actress is married or not. Well, Emer Kenny is happily married to her long-time boyfriend turned husband Rick Edwards. Her husband Edwards is a popular English Television personality who is currently hosting the shows E4, Channel 4, and ITV2.

After dating for five years, Kenny and Edwards finally walked down the wedding aisle on 28 May 2016.  Their romantic ceremony was held at London's Kew Gardens among their close friends including  Alexa Chung and family. Well, Emer and Rick's wedding was the definition of WeddingGoals.

Also, Emer posted the lovely wedding picture of the couple walking down the aisle as husband and wife via Instagram on 29 May 2016 with the heart emoji caption.

Similarly, on 1st June, Emer shared the snap of the newly married couple standing in Kew Gardens, in front of the Palm House. She captioned it,

‘One more because I’m in a rainy car park in Gloucetershire and I’m not ready for it to be over.’

Currently, the is cherishing their marital life for three years.

Recently on 28 May 2019, they celebrated their third wedding anniversary and even Emer shared the picture via Instagram.

They've been in a nuptial relationship for three years now. But to date, there's no news of her pregnancy and sign of giving birth to their offspring. It seems, now they both are busy with their career timetable.

Besides, they have never been involved in controversies or rumors to date. Therefore, they have a magnificent married life and are also planning to further expand their career.

How much is Emer Kenny Net Worth? Salary, Income

The British actress and screenwriter Emer Kenny has a net worth of $3 Million as of 2019, a bit less than another actress Millie Bobby Brown. Likewise, she has amassed this part of her fortune and wealth from her career as she appeared in many famous TV shows and movies. Besides acting, she also worked as a screenwriter of Tv series. Hence, Kenny reportedly paid $47 thousand annually.

With all income and earnings, Emer Kenny surely living a very rich lifestyle in lavish ways. Moreover, there is no information about her cars, house, and property.

Emer Kenny as an actress

Grew up in North London she has three siblings but there is no information about her family background. She holds British citizenship and belongs to Welsh and Irish ethnicity. Emer joined North London Collegiate School (NLCS) in Edgware, Middlesex, London, until 2008.

Kenny first made her TV debut through BBC TV drama Coming Down the Mountain in 2007. Then, she made her first film debut in Phil Claydon’s Lesbian Vampire Killers in 2009.

Moreover, Kenny has starred in many TV series including EastEnders, Eric and Ernie, Freefall, Pramface, Beaver Falls, Badults, and Father Brown. Apart from it, she has contributed some scripts as a writer EastEnders: E20(2010), EastEnders(2012-14), Doctors(2012) and Holby City(2012).

Stay connected to married celeb for more biographies and gossips