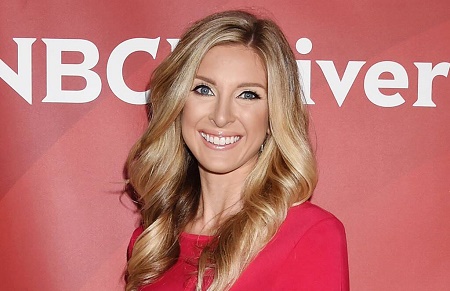 Lindsie Chrisley, age 30, is the eldest daughter of Todd Chrisley and his ex-wife, Teresa Terry. She starred in the USA Network reality series Chrisley Knows Best before she quit the show in season 5 when she fell out with Todd. Then, she went on to host the podcast titled Coffee Convos with Teen Mom star Kailyn Lowry.

Born on 17 September 1989, Lindsie has a biological sister named Kyle Chrisley and three half-sisters Chase Chrisley, Grayson Chrisley, and Savannah Chrisley.  Plus, she is Julie Chrisley's stepdaughter.She received her Marketing Degree at Georgia State University where she studied from 2008 to 2012.

Exchanged Vows with her Future Husband, Will Campbell

Lindsie and Todd have a strained relationship, and it all stemmed back to her early twenties. Every parent wishes to give their daughter to a colorful wedding celebration.

However, this was not the same for Lindsie and her boyfriend, Will Campbell. As the lover wanted to surprise Todd with the news of their elope and Lindsie's pregnancy, after 5 months of dating. As the website of the USA Network asserts:

The statement goes “Lindsie stunned her father, Todd, with her decision to elope and then five months later"the source added "surprised him even more with the news that she was expecting her first child.”

The couple had given birth to their son, Jackson Campbell, in 2013, before tying the knot. However, Dad, Todd Chrisley, 51, was reportedly very unhappy with Lindsie's marriage decision with Will.

The couple went on to marry in 2012 with Todd never approving of their union. Later, Lindsie following the wedlocks left the Chrisley Knows Best in 2017, after feuding with her father. She left the show, not on good terms with dad, according to sources.

She Divorced Her Baby's Dad

Unfortunately, the pair marriage partnership fell in terrible terms when they got separated four years later in August 2016 due to personal disagreements. She once talked about her estranged husband's relationship with People: “

In a statement, candidly, she said "He was my first love. We got together when we were 19 years old, and"  further adding "over time we grew separately in different directions instead of together".

Todd's eldest daughter said she still loves her ex-husband and wants to be his best friends, but enough to live with him. She added: "He still holds a special place in my heart. I still love him, always and forever. I have nothing negative to say.”

When it comes to resolving their divorce, Chrisley and Campbell canceled it twice. The ex-married couple realized they were supposed to be with each other, according to the online Radar. In addition, last summer in 2017 Lindsie removed the divorce document.

Back to her Estranged Partner

Yeah, you have heard it correct. The couple who have been together since Lindsie was 19 appears to reconcile and may be in process of remarrying. The troubled couple now maintains a happy and peaceful relationship for their son's sake.

She once said on Instagram page posting the picture of herself and Will, with a lovely caption perhaps pointing towards their future relationship.

American businessman, Todd went public saying that his daughter had affairs with Bachelorette alum named Robbie Hayes and fellow Bachelor Nation star Josh Murray while she was still married. Robbie, 31, however, dismissed the claims and said that he and Lindsie have been friends for long.

Hayes said in the US at Ok: " “It was more serious than a one-time thing, but we never became official". Robbie, the Bachelorette alum, also added: “I enjoyed spending time with her but we never got to that. … We haven’t been sexually active with each other in two years, but back then we had a fling.”

Then the accusation came after Lindsie claimed in a police report on July 16 that her dad and stepbrother Chase Chrisley "were releases [a] sex tape involving her." She claimed in her police report that “there is an ongoing issue with her family threatening and harassing her.”

“It’s heartbreaking and shameful that these kinds of accusations have to be aired in public. We have tried to keep Lindsie’s extramarital relationships with Robby Hayes [the alum of the show the Bachelorette] and Josh Murray private for her sake since August of 2016,” Todd stated in a statement on August 15.

"Unfortunately, for reasons that we can only guess at, she went to the sheriff's office to accuse her brother of buying her and Robby's sex tape, which was a total lie, and now she's telling me more lies, Todd Chrisley says. "Although our hearts are broken, Lindsie is our daughter and we will always love her" added the reality TV Star.

As we all know, the eldest Chrisley's child Lindsie Chrisley is not close to him. But still, she does not stop her from supporting her dad in the aftermath of his health struggle with the novel coronavirus (COVID-19).

Lindsie, 30, posted, wrote along with a negative DM screen capture on her Instagram Post. “This is disgusting. My inbox is flooding with similar messages & I’m not here for it". But she said she didn't want anything wrong with Chodd to happen.

The podcaster claimed on Thursday, April 9, that she found out about her estranged father's diagnosis via Instagram after multiple fans sent her sister Savannah Chrisley’s post about the pandemic news of dad. She said an interview with The AshleyOpens:

"It made me really sad to see he had been hospitalized,”“ the audacity of some people blows my mind,”

But, TMZ said later, she doesn't expect Todd's health to fix their relationship, saying, “Corona doesn’t change what did happen [between us].”

Likewise, Todd announced on his Chrisley Confessions podcast on Wednesday that he had tested positive for COVID-19. And his case was so serious that he was hospitalized at the Vanderbilt University Medical Center in Nashville, Tennessee for four and a half days.

He stated: “It has been the sickest that I have ever been in the 52 years I’ve been on this earth". He added that although he’s  healing now, he is still “not clicking on all cylinders.”