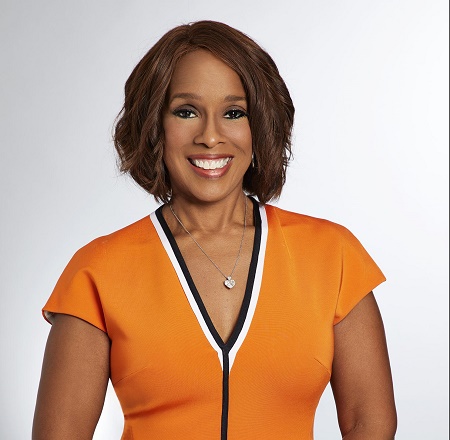 Gayle King is an American journalist, TV personality, and author. Currently, she works for CBS News as a chief anchor and flagship morning program CBS This Morning as a co-host. She is moreover an editor of O, The Oprah Magazine.

King was born on December 28, 1954, to Scott King (former electrical engineer) and Peggy King (homemaker) in Chevy Chase, Maryland, the United States. She holds American citizenship and is of mixed (African- American) ethnicity.

As of now, this 65 years old journalist is living a single life along with two adult children, Kirby Bumpus, and son, William Bumpus Jr. and also co-parenting them since 1993. In fact, she has been enjoying her singledom for twenty-six years.

Gayle, however, was previously married to the former assistant attorney general, William Bumpus. This couple tied the knot in 1982 on an intimate ceremony. They even share two kids together from their long-term conjugal life. Unfortunately, the couple officially divorced in 1993.

Actual Reason Behind their Divorce

In 2006, the main reason behind the Bumpus was announced by the CBS anchor and shared with interviewer Will Smith with SiriusXM radio. She said that her ex being unfaithful to her and was caught in the act.

Also, she found William cheating on her and finding that he had sex with another woman said with the Proust Questionnaire of Vanity Fair. She said:

Instead, the woman was a friend of King who told the CBS reporter, 'I never liked you,' after being caught in the act with Williams, and also said that her so-called friend had no regret at the time for her actions.

Sure, after misleading Gayle, he regrets his mistake, saying he's been haunted by his life-changing decision by replying to Entertainment Tonight. He has dealt with this personally, however, and openly apologizes for the big transgression that has dramatically changed our entire lives.

William also stated that King was a great wife, a great mother, and a great co-parent. He added, too, 'I'm eternally grateful for all she's done and keeps doing to enrich my life and the lives of our amazing adult children.'

As we already mentioned above, Gayle is the strong mother of one older daughter, Kirby Bumpus welcome on 12 May 1986 and one younger son, William Bumpus Jr., born on 28 April 1987.

Recently, on 11th February 2019, the mother of two announced the happy news that her beautiful daughter is officially engaged with her fiance, Virgil Miller. For now, daughter Kirby and son-in-law Miller might be busy preparing for their big day to exchange the wedding vows very soon.

How much Net Worth King Accumulates?

Gayle enjoyed a long and successful career as a news reporter for American television. Her staggering net worth as of 2020 is estimated at $20 million. Likewise, she made her most of the income as a news anchor, talk show host and editor of O, The Oprah Magazine.

King is now recognized as one of the CBS network's top anchors. In May 2019, she officially signed a multi-million contract with the network, with a minimum wage of $11 million per year. Additionally, between 2014 and 2019, she received an annual income of around $5.5 million.

Similarly, the author has done many headline-making interviews. she has spoken to newsmakers such as Taylor Swift, Reba McIntyre, Michelle Obama, and Cicely Tyson. Moreover, she has also worked alongside Tony Dokoupil and Katie Couric.