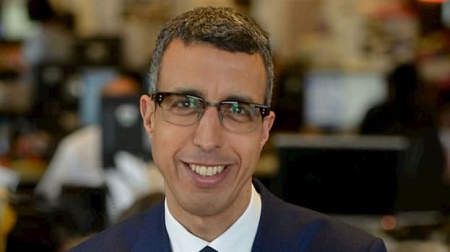 Who is Kamal Ahmed?

One of the widely known and famous TV personality, Kamal Ahmed is working as an editorial director for the BBC News. Well, he is a British Journalist who joined the BBC after serving four and a half years of the Sunday Telegraph’s award-winning team as the business editor.

Kamal Ahmed was born on 15 November 1967 in Ealing, London. Further, he is the son of an English mother and a Sudanese father. His father was worked in ophthalmology as a research scientist. Ahmed holds British citizenship and is of mixed ethnicity. As far as his education, he studied at the Drayton Manor High School from 1980 to 1986. Later on, Kamal graduated from the University of Leeds with a degree in political studies in 1990.

Ahmed then trained in journalism at the Department of Journalism at the City University. In 1993, he worked on local newspapers in Scotland before joining Scotland. He later shifted to The Guardian and became The Observer newspaper's executive news editor and political editor. After working in the newspaper several times, Kamal became Communications Group Director at the Commission on Equality and Human Rights, recruited by Chairman Trevor Phillips.

In 2009, Kamal started to work for The Sunday Telegraph as a business editor. He became executive business editor in 2013, with a role throughout the print edition of Sunday and Daily Telegraphs. On 20 December 2013, Ahmed joined BBC News as the business editor, replacing Robert Peston. Further, Ahmed was announced on 30 July 2018 as editorial director of BBC News, replacing him with Faisal Islam in his present role. Besides, he has also worked with another priominent journalist such as Emily Maitlis and Mishal Husain.

TV reporter, Kamal Ahmed is now reported to be single. But, aged 50 Kamal Ahmed was once married to his girlfriend turned wife, Elizabeth Day. She is an also journalist and novelist.

On December 2011, Ahmed and Day walked down the wedding aisle. The wedding ceremony was attended by their family members and close relatives.

Unfortunately, the couple sparkled their marital relationship until February 2015. Hence, the wed couple had together for three years only. Furthermore, it seems they also don't share any children together.

Following the divorce with Day, Kamal grabbed the people attention when he started to date with glamorous newsreader Sophie Long. Ahmed and Long have been seeing each other for a few months. And they confirmed their relationship at a party at the Royal Academy of Arts in February 2016.

At that time, their friends hoped that they have found lasting love. Sadly, their romance petered out in 2017. But Kamal, 50, publisher of economics has already found another striking blonde with whom toast the 2018 dawn.

The Editorial Director of the BBC News, Kamal Ahmed has a net worth of $23 million as of 2019. He has made this bulky amount of figures from his long term journalism career.

The current BBC News editor Ahmed receives a large revenue from the BBC News Network. This is because he is an accomplished BBC journalist who has been active for a long time in this sector.

Now, talking about his salary, Ahmed reportedly makes an annual salary of $190,000 as a BBC News journalist. Likewise, his work is widely appreciated because of the content he covers in his news and articles at BBC.