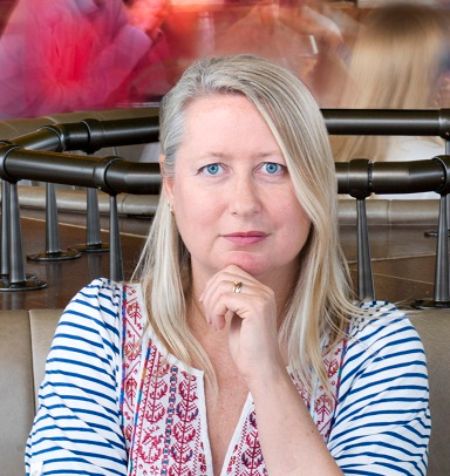 British journalist, Lisa Markwell is well known as the food editor for the largest-selling national newspaper, The Sunday Times. She is currently serving for CODE Hospitality, one of the principal authorities on London's hospitality industry. For her notable work, she received a Chairman's Award at the Society of Editors Press Awards.

Markwell was born in 1965, in Buckinghamshire, a Shire county in South East England, United Kingdom. She is an American by her nationality and belongs to Caucasian white ethnicity. Other than that, she is living a happy married life along with two kids.

Marital Relationship with the Founder of Delsion

The 54-year-old journalist is married to Jules John, the founder of an award-winning people & development consultancy, Delsion. The duo tied the knot in an intimate ceremony. Further, her husband is a native of Cardiff, Wales.

By the end of September 2011, the married pair decided to adopt children, but they often felt that they couldn't be good parents. Markwell also wrote about the adoption process and the challenges facing children's unique needs and their families.

The couple later adopted two adorable children on 4th February 2004 with fulfilling all the requirements and care of the infants from a tribal public child welfare agency. On 11th March 2018, she posted a picture of her kids while celebrating Mother's Day. More to that, Lizzie Greenwood-Hughes is also active in charitable works.

Lisa Markwell has a net worth of $500 Thousand as of 2019. She boasts a lucrative salary from her profession as a journalist. According to Pay Scale, an experienced journalist makes a wage of $45,845 in the United States.

The beautiful personality is profoundly working as the ambassador for charities like Chefs in Schools, Action Against Hunger, and Magic Breakfast. She gave 5% of her income to the charitable funds so that some needy people can live better lives.

Markwell was a Cancer Survivor

The prominent journalist was undergone through treatment for breast cancer in 2009. Before the surgery, she found a lump in her busts on 9th June 2008. At that time, she was shocked that it would happen to her, but then she realized it happens to hundreds of thousands of women.

Markwell and her husband went for a check-up to confirm whether it is cancer or not. They later made an appointment with a doctor to consult about the lump to pull out from her breast. On 20th June 2008, she was diagnosed with breast cancer and started thinking about her children, how to deal with them, and what happens in surgery. But, her husband was the one who helped her in that situation and supported her until the treatment was over.

Lisa also got many messages from her social media, where numbers of her fans were wishing and praying for her to win the battle between her and cancer. On 18th August 2008, she had a surgical operation to make out the lump from her busts. After the surgery, she did chemotherapy, radiotherapy, and many more. Currently, she is healthy and working proficiently.

Actively working as an Editor

Lisa Markwell started working as a feature director for the Conde Nast Publications in September 2004. She then served as an executive editor for the wide-ranging brief across the newspaper, The Independent on Sunday on April 2008.

Markwell got a big opportunity to work for the Uk's most free-thinking newspaper, The Independent on September 2010. While there, she wrote many cover stories for the newspaper's second section on a broad range of subjects, from politics and education to fashion and health.

Markwell also served as a chef during training in Leiths School of Food and Wine, where she wrote a book based on her fascination with food and restaurants in September 2016. Currently, she works as a food editor for the Sunday Times as well as for CODE Hospitality since 2017. The Sunday Times is the same national newspaper company where prominent journalists like Nicholas Lloyd also worked for the journal.

Experience gained as a Volunteer

The prominent editor, Markwell volunteers at the new charity foundation, Chefs in Schools since March 2018. Back in April 2014, she participated as a volunteer for the Action Against Hunger (ACF-UK), which helps to alleviate poverty.

Lisa is also serving as a volunteer as well as the ambassador of the charity foundation, Magic Breakfast, where she raises money to assist food supplements in the underprivileged communities. She further collaborates with the CEO of the charity, Carmel McConnell, and the senior team on various social activities since January 2014.

Lisa Markwell worked in one of the most successful brand extensions for The Independent Magazine, The Happy List. This project was taken to a new level from the leading charity fundraising, JustGiving, which provides substantial national and local media coverage from thousands of nominations from the public from April 2013 to March 2016.

Lisa also collaborated in the project, The Rainbow List, influencing in the LGBT community from April 2013 to March 2016. This project also modernizes the brand extension and reflects its wide-reaching ambitions.

The executive editor, Markwell, worked with the established national trade body for Social Enterprise UK to promote awareness and encourage public engagement through newspaper features from September 2014 to March 2016.

Lisa also became a media partner of the Sustainable Restaurant Association, where she promoted and helped to judge their annual awards in January 2014. She is currently working as a committee member of the Women in Journalism organization since May 2013.

Lisa Markwell won the Weekend Newspaper of the Year award with The Independent while working as an editor at the annual national news awards beating The Guardian and second-placed, The Daily Telegraph, on April 2014.

Markwell also won the Front Page of the Year award after Islamic State terrorists killed the British aid worker Alan Henning and released photographs. The award function was held on 5th October 2014 at the 2015 Society of Editors British Press Awards.

Markwell also earned the Progress 1000 Award during the London Evening Standard function on September 2015. In the following year, she received a special award, Chairman's Award at the Chairman's presence in March 2016.