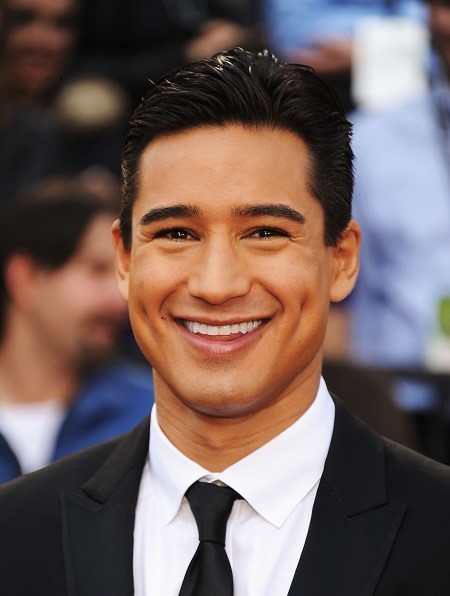 Mario Lopez is an American prominent television host and actor who is best known for starring on TV sitcom Saved by the Bell and Saved by the Bell: The College Years as A.C. Slater. Also, he has made appearances in various TV projects as a host like Dancing with the Stars, Extra, and America's Best Dance Crew. In addition, he co-hosted The X Factor with Khloe Kardashian in 2012.

Mario Lopez Jr. was born on October 10, 1973, in San Diego, California, United States. His father Mario Michael Lopez, Sr. worked for the municipality of National City while his mother Elvira is a telephone company clerk. Further, he has one younger sister Marissa, who is married to Kailee Wong, an NFL player. So far, he holds American citizenship and is of mixed ethnicity.

Who is Mario Lopez's Current Wife?

She is none other than, Courtney Laine Mazza, who works as a producer and actress. They first met while working together on "A Chorus Line" on Broadway in New York.

They started dating in the fall of 2008. After one year of love romance, they became an engaged couple in 2011. Following an 11-month-long engagement, the couple walked down the wedding aisle on December 1, 2012. They dated for four years before saying yes I do.

Their beautiful Mexican ceremony was held on Saturday in a Punta Mita, Mexico, with 200 guests attending. Among the guests was a very good friend of Mario, Eva Longoria, who wore a blue suit, with her mum.

During their intimate ceremony, the bride Mazza wore a shoulder-skimmed lace gown custom designed by Ines Di Santo. While the groom Lopez dressed in a fitted black tuxedo. More precisely, their two-year-old daughter Gia served as the event's flower girl.

As of today, this stunning couple, Laine Mazza and Lopez have been sparkling their conjual life for over six years. And actually, they've been together for over a decade. They have recently celebrated their 6th year of the wedding ceremony in early 2019.

He is A Proud Dad of Three

Yes, it is very true. The 46 years old  Lopez shares three young kids with his wife, Laine Mazza, 37. Before their marriage, they welcomed their first child or daughter Gia Francesca Lopez, on September 11, 2010.

The 168 cm tall actress and 178 cm tall actor gave birth to another child, son Dominic Luciano Lopez, on September 9, 2013. On July 8, 2019, the couple embraced another baby boy into their family whose name is Santino Rafael Lopez. The TV host shared the news of his third-born new baby's picture on his Instagram wall.

His First or Divorced Wife is Ali Landry

The American actor Lopez was previously married to his ex-wife, Ali Landry, now 46 years. She is an American actress, model, and beauty pageant titleholder who gained Miss USA 1996.

They got hitched on Apel 24, 2004 in a Catholic ceremony after six years of dating. Their big day took place at the Las Alamandas resort in Puerto Vallarta, Mexico. But their marriage was annulled shortly two weeks later.

In an interview in 2011, Lopez said he had reportedly been disloyal to Ali at his bachelor party prior to the wedding. From 2006 until June 2008, he dated his dance partner at Dancing with the Stars, Karina Smirnoff.

What is the net worth of Mario Lopez?

As of early July 2020,  Mario Lopez has a net worth of $25 million. He has amassed his fortune throughout his over three decades of acting and hosting career. He is widely famous for co-hosting the entertainment news show Extra where Mazza also occasionally hosts.