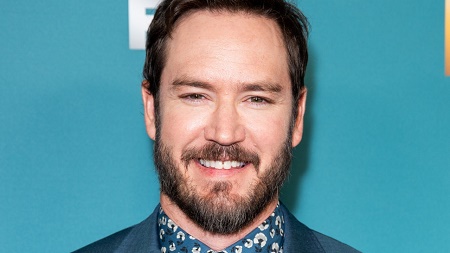 Mark-Paul Gosselaar is an American actor who is currently playing the role of Paul Jackson in  ABC sitcom series Mixed-ish. Also, he is famous for his various roles on NYPD Blue as Detective John Clark Jr. (2001–2005), and as Mike Lawson in Fox American drama Pitch (2015).

The respected actor was born on March 1, 1974, in Panorama City, Los Angeles to the homemaker mother, Paula Gosselaar, and father, Hans Gosselaar, a plant supervisor for Anheuser-Busch. Moreover, he holds American citizenship and is of mixed ethnicity.

The 5ft 11inch actor is a happily married man. He tied the knot with then-girlfriend now-wife Catriona McGinn. By profession, his soulmate is an LA-based executive who has worked with many major advertisements, communication companies, and broadcasts.

Franklin & Bash star and LA-based executive united as husband and wife in an intimate ceremony on July 28, 2012, in the presence of groom and bride's beloved ones. Precisely, their big day was held in Santa Ynez, California, at the Sunstone winery.

The couple also spends their honeymoon in Italy. The parents of two kids were previously engaged in August 2011, just a year of marriage. Now, the partner is in a good relationship, and it is apparent in their passionate bond together for all these years.

Similarly, the couple never misses to spend some time and attends the party and events together. In 2017, the actor with his advertising executive wife Catriona McGinn, who looked stunning in a knee-length strapless dress. Also, Mark-Paul was wearing a navy suit and tie for the smart occasion.

The husband and wife share two children from their conjugal life. They gave together their firstborn child, a son named Dekker Edward Gosselaar, on September 30, 2013, whose age is 6 now. Most surprisingly, elder son Dekker is interested in sports as he has played many games over the past several years, including baseball.

On 14 February 2015, Mark and his wife McGinn added another package of joy when their first child, Lachlan Hope Gosselaar, was welcomed. Now, this lovely duo is enjoying some precious time along together in California with their two young children.

Franklin & Bash star was previously married to his first wife, Lisa Ann Russell, prior to meeting Catriona.  They had a long marital relationship as they were almost together 20 years. The former lovebirds united as a life partner on August 26, 1996, at an intimate ceremony in Maui Cove on Maui, Hawaii.

Sadly, Paul and actress Ann Russell announced their spilt up early 18th of June 2010 and officially ended their relationship on 27 th May 2011. From the matrimonial, the duo shared one son Michael Charles Gosselaar who was born in 2004 and a daughter Ava Lorenn Gosselaar in 2006.

Afterward, Gosselaar shared the custody of their two babies. With Scrreenver TV, he said that  “I have nothing but nice things to say about my ex-wife and the years that we spent together, and I think it’s very important that the kids are around us both equally."

Not only this, his current wife Catriona, always tries to create a good environment and cordially adjusts for Lisa and Paul's kids. Over the years, the couple has brought their babies to different premiere and kids events. McGinn and Mark keep things quiet for the betterment of their children, and they seem to be getting along well.

Moreover, former wife Lisa is now married to Jeff Probst, an American game show host and an executive producer. They walked down the aisle on 5th December 2011. The venue of their marital ceremony was held in Los Angeles, California.

Jeff and Lisa first met at a party that was held by the producer of Survivor, Mark Burnett. Jeff is the stepfather of two kids Micahel and Ava. And recently, on, Probst said with GQ about how much he missed home when he stays away from home. He said:

Anna's current husband Jeff Probst was previously wedded to Shelley Wright in 1996. Well, she is an  American country music singer and activist who is famous for Shut Up and Drive. They officially got divorced in 2001 after a marriage of 5 years.

The renowned star told People Magazine that he dated different women during the producing show Saved By the Bell in July 2009. He dated his three female co-stars, including Lark Voorhies, Elizabeth Berkley, and Elizabeth Berkley. Mark, however, still remains friends with his castmates of Saved by the Bell.

The famous American actor Mark-Paul Gosselaar has a staggering net worth of $9 Million as of 2019. Of course, he made this bulky amount of sum throughout his long and strong career as an actor. Thus, the actual source of income for Gosselaar is a television screen, as he appears in many hit movies and television shows.

Paul Gosselaar, moreover, is famous for portraying the role in Saved by the Bell and NYPD Blue. Thus, he might be paid $49,923 per year for his role. Likewise, he shared the screen with famous Hollywood TV stars, including Jimmy Smits, Dennis Franz, Elizabeth Berkley, Sarah Lancaster, and others.