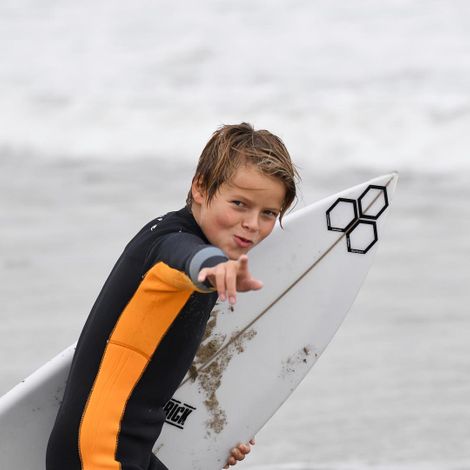 If you are born in a family of celebrity, then you surely get fame and always become the topic of discussion. In the same way, Moses Martin also remains in the eyes of paparazzi and media since birth.

Who is Moses Martin?

Moses Martin is the younger child of former couple Singer, Chris Martin, and Actress, Gwyneth Paltrow.  Moses was born on 8th April 2006 in Manhattan, New York City. As per his birth date, he is 13 years old.

Also, he has a one elder sister Apple Martin who was born on 14 May 2004. His paternal grandparents are Anthony John Martin and Alison Martin, a music teacher.

Moses holds American citizenship and is of mixed ethnicity. As far as his education, he is now attending in LA’s Harvard-Westlake School.

As we already mentioned, Moses' parents are Hollywood celebrities. His mother Gwyneth is an  American actress, singer, author, and businesswoman as well. Likewise,  Academy and Golden Globe award-winning actress is known for such movies such as Se7en, Emma, and Great Expectations.

On the other hand, Martin's father Chris is an English singer, musician, record producer, philanthropist, and songwriter. Likewise, he is famous as the lead singer and co-founder of the rock band Coldplay.

The celebrity son, Moses Martin, is not dating anyone as he is only 13 years old. So, he still needs his parents' love, care, and support rather than involving in any kind of relationships. Thus, having a girlfriend is perhaps a future talk, and for sure, he will get a good life partner as he is cute and handsome.

His father and mother are no more in a marital relationship. Well, the former couple walked down the wedding aisle on December 2003 at a quiet ceremony in a hotel at Southern California. Talking about their first met, they met in October 2002.

After the ten years of nuptials, they announced that they are going to separate in March 2014. But their divorce was finalized on 14 July 2016. Moreover, both parents remain close friends since the divorce and are bringing up the kids together.

After the divorce with Chris, Gwyneth remarried to the producer Brad Falchuk in September of 2018. Apple and the daughter of Falchuk, Isabella, were bridesmaids at the wedding ceremony. Isabella is a daughter of the previous relationship between Brad and Suzanne Falchuk.

On the other side, Moses' dad Chris Martin is also in a new romantic connection with his actress partner, Dakota Johnson.

How much Net Worth does Moses Martin have?

Moses Martin is not involved in any profession yet. Hence, there is no actual income source of celebrity son, Martin. At the current moment, his net worth, salary, and earnings are under review.

At present Moses is relishing on his parent's wealth

Being born to the millionaire musician and actress parents, Moses is getting raised with full of resources and prosperity. Moses shares the whopping net worth of $60 million and $120 million of his actress mother and musician father respectively.