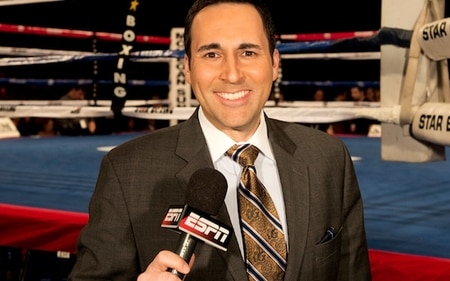 The Broadcasting style of Joe Tessitore is what makes him one of the unique sports broadcaster out there. His fans have named his style "the Tess effect". Though his professional life is very open to his fans, Joe likes to take his family away from the spotlight.

The go-to man for Monday Night Football is married. He tied the knot with a woman named Rebecca Tessitore, but how much do we know about her? Let's find out in the article below.

How is Joe's Married Life with Rebecca?

As much as dynamic Joe is on-screen, he is that much secretive with his personal life. He walked down the aisle with Rebecca a long time back. Neither Joe nor Rebecca likes to share any details about their marriage.

Even though the couple's never shared their stories in the media, many online tabloids suggest the pair were dating. Rebecca is Joe's long-time girlfriend, and as they were head over heels in love, they decided to get married.

The duo might've been dating each other before the nuptials, but the how and when they started their romantic affair is still a mystery. As of now, the pair is thrilled in their marital life as no rumors about their separation is heard of.

Joe's son is a Kicker on the Football team

The man who is keeping his personal life a mystery has added another part to it. Does he have any children? If so, then how many? The answer to this question is many fans wants to know.

As per online sources, the ESPN sportscaster is a father to two children, a son, and a daughter. His son, John Tessitore, is currently studying at Boston College while no details are provided about his daughter Nicolina Tessitore.

John is currently playing football for his college team. With his father being in a sports business, John was bound to get influenced by Joe's profession. John is playing as a Kicker in his football team and dreams of making it professional in the coming years.

A couple of years back in an interview with The Ringer, Joe Tessitore commented on Joe Buck. He said,

"You say Joe Buck to me. I acknowledge the guy's great. I didn't have Joe Buck's avenue, brother!...I was in Schenectady, New York, having a heel of bread and having some prosciutto."

Joe Buck replied to this statement saying, "He doesn't know me." He furthermore, says that everyone has their own story. Buck emphasis how hard his journey's been and how much of hard work he's done to the level that he is in today. Just by having a dad like Jack Buck doesn't mean Joe Buck lived a comfortable life.

Besides that, Tessitore is a fantastic sportscaster and works at ESPN alongside Malika Andrews and Tiffany Greene, to name a few.