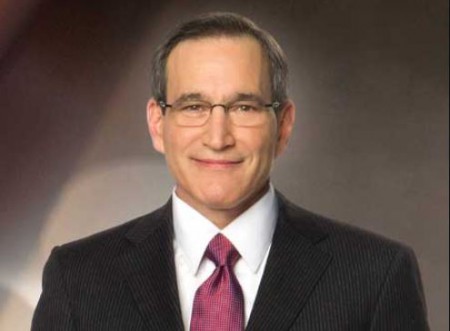 The 63-year-old, Rick Santelli is an on-air editor for the CNBC Business News Network. He has been working with the network since 1999, reporting primarily from the floor of the Chicago Board of Trade. Santelli also served as the vice president for an institutional trading and hedge fund account.

Rick was born in 1956 near Taylor Street in Chicago's old Italian neighborhood. He graduated with a Bachelor of Science in economics from the University of Illinois in 1979. Apart from having a lucrative professional career, Rick has a blissful married life.

The CNBC's longtime editor, Mr. Rick Santelli, is a married man. He has been married for a long time with his wife, Terri Santelli. However, the exact timeline of his relationship is unknown. Further, Santelli hasn't revealed any information about his marriage.

Since 2015, Rick has been residing with his wife and three daughters in Wayne, Illinois. On his leisure time, Rick spends his time with the family painting and restoring old cars. As he is extremely passive on social media, it is difficult to find his personal family tree.

Till now, Rick and his longtime spouse haven't been involved in any controversies as they must have crossed over several years as husband and wife.

On February 19, 2009, Santelli drew attention for his comments he made about the Homeowners Affordability and Stability Plan.

He is credited as being a catalyst in the early formation of the Tea Party movement, and some people remarked it as a national phenomenon. However, he later clarified his comments and addressed the concerns that the event was staged.

Rick began his career with the Chicago Mercantile Exchange and the Chicago Board of Trade as a commodity trader. However, in the early 1990s, he began making guest appearances on CNBC and accepted a full-time job with the station in 1999.

Since 1999, Rick has been an on-air editor for CNBC, and his focus is primarily on interest rates, foreign exchange, and the Federal Reserve. He is a regular contributor to CNBC's Squawk on the Street, whose anchor, as of now, is Carl Quintanilla.

Moreover, Santelli has provided live reports on the markets in print along with local and national radio and television.

The renown American television personality, Rick Santelli, has a net worth of $8 Million as of 2019. Additionally, Rick is a veteran trader and financial executive who is known for receiving a higher salary of $2 million per year.

Santelli is often called the smartest man in the business. With such higher salary and earnings, he spends his income on expensive suits and luxurious cars. Finance analyst, Evan Morgan, whose career trajectory is similar to Santelli, has a higher net worth.

The Chicago-based CNBC editor Rick Santelli bought a luxurious house for $730,000 in west suburban Wayne. The 5,502-sq-foot Prairie-style house consists of a five-bedroom. The beautiful two-story house was built in 1991 and sits on 3 acres and has four and a half bathrooms.

Moreover, the house has an attached four-car heated garage and a full finished walkout basement with a bedroom, a bar, and a billiards room. Outdoor features include a five-car heated detached garage and a pond.