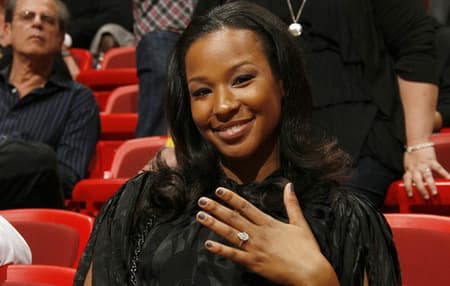 Apart from being famous as the wife of LeBron James, Savannah James has received praise for her golden heart. She is a philanthropist and a businesswoman who started a mentorship program called Women of our Future for young girls.

Savannah and LeBron's married life was undoubtedly the talk of the town in 2013. Now, the couple is spotted at their sons' basketball game. The celebrity couple is one of the most adored couples; now, let's know more about their personal life.

The love between the couple is not new they are head over heels in love with each other since the high school days. LeBron first met Savannah in 2002. At the time, LeBron played for St. Vincent-St. Mary High School, while his lady love, was a cheerleader and a softball player for the rival school.

The duo went out on a date at an Outback Steakhouse, and with more dates, love started brewing between them. A couple of years later, LeBron was drafted by Cleveland Cavaliers, but that did not weaken their love.

As of now, the duo is together for almost eighteen years and are successfully raising three children. Recently, the couple took a trip to their son's basketball game. Their enthusiasm and support for their son went viral after the photos of the pair were snapped.

In front of 200 guests, the duo exchanged a wedding ring with each other. At the fantastic venue in San Diego, the pair performed their bridal ceremony under massive security measures.

According to USA Today, the news helicopters who were keen on taking video footage from above returned empty-handed as they used umbrellas to protect the identity of the guests. But as per close sources, Miami Heat owner Micky Arison, coach Erik Spoelstra, and Dwyane Wade are some of the few names in the guest list.

Talking to the media, Savannah said that the marriage turned out to be her dream wedding.

When LeBron was playing in his rookie years, Savannah became pregnant with the pair's first child. In an interview, she said,

"I was thinking, what am I going to tell my parents? What's going to happen to his career?"

But opposite to her thinking, LeBron was very supportive and showed his love towards her. She gave birth to LeBron James Jr. (Bronny) on October 6, 2004. Three years later, on June 14, 2007, the duos' family expanded from three to four with the birth of Bryce Maximus.

After their weddings in 2013, the lovebirds were ready for the next child as well. On October 22, 2014, Mrs. James gave birth to Zhuri Nova James. LeBron had all the great things to say about his daughter; about how she changed and made him a stronger person.

How much is her Net Worth?

According to online sources, Savannah's net worth is estimated to be at $50 million. She is a businessperson, Furniture designer, Entrepreneur, and Philanthropist. Most of her income comes from her business career.

From the money that she made from her business, James is now contributing to help children via philanthropic ventures. On the other hand, her spouse's wealth is at $450 million as per Forbes.

From his playing career, he received an income of $270 million and the rest acquired from the brand endorsements and his businesses. Looking at NBA legend Michael Jordan's net worth ($1.9 billion), James fortune doesn't look that big.

In 2018, the LA Lakers' superstar, LeBron, bought a $23 million mansion in Brentwood. The couple is now spending memorable days in their luxurious house with their kids. As per Business Insider, the home is the pair's third house in total and second in LA.

The new lavish facility has some splendid interior decor with some finesse furniture. It consists of eight bedrooms, eleven bathrooms. Not just that, the mansion also contains an indoor-outdoor gym, a theater room, a spa, and many more.