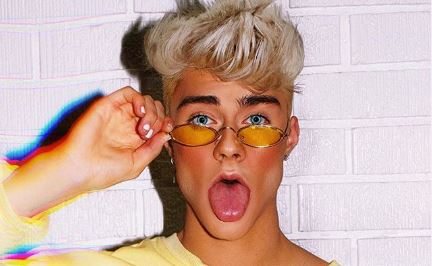 Sebastian Bails is a popular blogger and Social media artist who is famous for his make-up, Lip-syncing, and funny videos. He is popularly renowned as Mr.Orange due to his signature makeover, which consists shaded foundation in Orange color all over his body just like another YouTuber Venus Angelic. He also blogs about LGBT concerns and takes an interest in Pride parades and other activities.

Sebastian Bails was born in California on 27 August 1999. It was reported that he was in a relationship with his fellow TikTok member Danielle Cohn, but there were no confirmations. He previously posted that he was staying with Danielle in Los Angeles and considered her to be his sister.

Well, most of his fan and his regular audience seems to claim that, Sebastian is perhaps a gay. It's not anything new for him being speculated as a gay. However, Sebastian never really officially stated about it.

Nevertheless, as per now, he can't be regarded as gay because he seems to have a girlfriend name, Lauren Godwin. Just Scroll down to know more.

Sebastian Bails, the young YouTuber, is having a great time with his girlfriend, Lauren Godwin. The couple seems to have great love and affection for each other. Lauren can often be seen in Sebastian's social networking profile. And Sebastian never misses a chance to show his love he has for his present girlfriend Lauren GodWin.

Sebastian girlfriend Lauren first step in social media was her tweet to R&B artist Justin Biber where she tagged him and quoted "Justin Biber I Love You". Similarly, like Sebastian, Lauren is also having a career as a social media celebrity. Lauren has over 3.5 million fans in her TikTok account as well as she has her own YouTube channel with 800k subscribers.

Sebastian is moving ahead in his life with the support from his partner. However, there are no rumors regarding their marriage or engagement. Wanna know more just scroll down.

According to NBC, the pair resides side by side on the gray kitchen island of Bails' current apartment. Bails and Godwin, both 19 years old, are the brightest stars of popular site TikTok. They often collaborate with each other and make some videos to entertain their fans.

On their YouTube channels also both of them can be seen in a bunch of videos. It seems like the couple is growing together on the social networking sites. Furthermore, a significant majority of their audience is viewing them with a cynical sense of indifference, a type of so bad they can't look away and the internet labels it as "cringe."

Most viewers who watch their content are typically making fun of them rather than trying to be like them. In addition to that, upon releasing the "No Scrubs" video, the responses were made by people questioned Bails' heavily tanned skin and criticizing their relationship.

How Much He Worth?

Sebastian has a few big followers on social media. He is totally active on the platform like Instagram and YouTube, TikTok, etc. Regarding his popularity and followers, he must be earning decent wealth. As per 2020, his net worth is around $500,000.

He has more than 800k subscribers on his channel. And probably he earns around $30,000 to $45,000 a year just like Grace Sherer. Meanwhile, his success came through TikTok where he has 10 million followers.

According to payroll, a million followers receive income between $5,000 and $10,000 for sponsorship on TikTok. However, That number varies on the basis of content and people's engagement. Therefore, Sebastian must be earning thousands of dollars through TikTok.

Stay Tune With Marriedceleb To Know More About Social Media Artist And Variety Of Celebrity!!