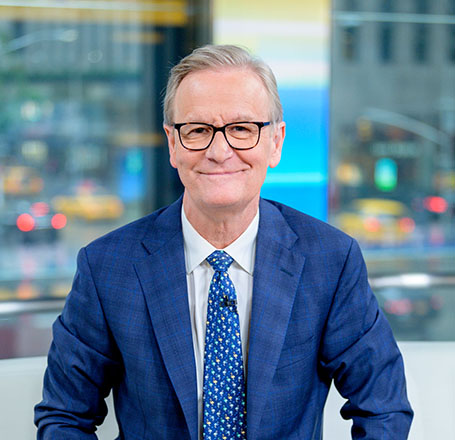 Steve Doocy is best known as the co-host of Fox & Friends of Fox News. The 63-year old Steve's eldest son Peter Doocy is also a reporter at Fox news. Steve is married to Kathy Gerrity Doocy since 1986. Journalist Rita Cosby is also a former Fox reporter.

Stephen James Doocy was born on October 19, 1956, in Algona, Iowa to JoAnne Sharp and James Edward Doocy who worked in sales and construction. Growing up in Abilene, Kansas, Steve attended grade and high schools in Russell, Salina, Industry and Clay Center. He later graduated with a BS in Journalism from the University of Kansas.

Steve Is Married to Kathy Doocy

Steve and his spouse Kathy first met while they were working for a TV station at Washington DC. It was Steve who laid out a marriage proposal to Kathy on Valentine's day. She said yes and their journey as each other's life partner began.

The couple finally exchanged the wedding vows on June 30, 1986. The wedding ceremony only cost the couple less than $300. On every Valentine's day, Steve lefts flowers and cards on the kitchen table before going to work. The pair are still each other's soulmates.

Steve and his Wife are Blessed with Three Kids

Steve's eldest son Peter Doocy, aged 32 is also a reporter for Fox News. He was born on July 21, 1987. As a kid, Peter has always dreamt about being a TV personality like his father. He completed BA-political science in 2009 from Villanova University.

He initially worked part-time as a Fox News reporter when he was still a college student. Another American journalist Allie Spillyards works for NBC news.

Peter's birth was followed by their second child Mary Doocy. They also have the youngest baby girl named Sally Doocy. Whenever they can, the Doocy family loves to get together with each other.

Growing up, Steve moved a lot due to his father's job so he wanted to raise his kids in one place. And so he and Kathy did that. As a father Steve was so devoted to his kids that, he prayed like never before when Sally had to undergo eye surgery.

Time went too fast for Steve and his wife because all three of them are now independent and live apart. But the Doocy couple hopes that Peter, Mary, and Sally will always carry with them the memories and laughter of home.

How much is Steve Doocy's Net Worth?

Steve might own a net worth around $10 million. As one of the best-paid Fox anchor, Steve's yearly income is more than the average figure. His average salary per year is over $4 million.  Currently, the Fox and Friends' host lives in the neighborhood of Wyckoff, New Jersey.

Steve is a lecturer at his catholic church. He has also written and published a cookbook titled The Happy Cookbook with his wife Kathy. Before that, Steve had already published a book Tales from the Dad Side and MR. & MRS HAPPY.

Tales from the Dad Side is all about being a father which Steve wanted to relate to all the fathers out there. Similarly, Steve wrote MR. & MRS HAPPY because he loved Kathy and wanted to prove how much he loved her.