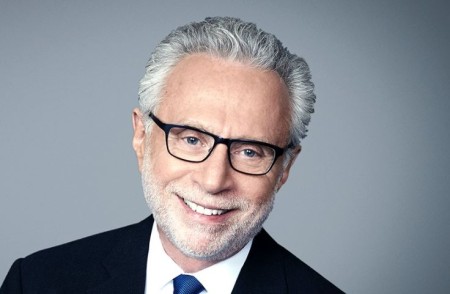 Wоlf Вlіtzеr іѕ a famous Аmеrісаn ТV nеwѕ аnсhоr whо began his professional јоurnаlіѕm career from a young age. One of the prominent rероrtеrs оf CNN network, Blitzer started working for the station in 1990 and the same year his team won a CableAce Award. With a staggering net worth and a seven-digit figure salary, Wolf іѕ widely recognized for his show, "Тhе Situation Rооm."

Furthermore, thе 72-year-old host and author іѕ the lеаd роlіtісаl аnсhоr for CNN. Blitzer was born on March 22, 1948, in Augsburg, West Germany. A 1970 graduate of Kenmore West Senior High School, he earned a Bachelor of Arts in History from New York State University at Buffalo. Also, he'd been a member of Alpha Epsilon Pi once there.

In 1972, he received a Master of Arts in International Relations from the Johns Hopkins University School of Advanced International Studies. Later on, he studied abroad at the Hebrew University in Jerusalem, where he taught Hebrew and at Johns Hopkins. Scroll down and know about his marital life.

Wolf Blitzer, a Veteran journalist, is a married man who marched down the aisle with his long time girlfriend turn wife, Lynn Greenfield. There are no reports regarding their wedding ceremony, but we do know he got married in 1973. The husband-wife duo has been together for nearly 47 years.

Wolf's old-time spouse, Lynn, used to work as a personal shopper at the Saks Fifth Avenue store in Chevy Chase, Maryland. She hails from Western New York. The couple has one daughter, and till now, their marriage stands still strong. Moreover, there are no rumors regarding their divorce and separation.

Over four decades of their marriage allows Wolf and his spouse, Lynn, to have a good life with their only daughter Ilana Blitzer. She was born in 1981 and is currently 39 years old.

IIana graduated from Emory and worked as a beauty editor of Family Circle in New York. She married her ex-husband, Joseph Orrin Gendelman, in Washington. After separating from her first husband, IIana married Daniel Snider in 2015. They welcomed a son, Ruben Daniel Snider, in August 2016.

Blitzer's Love For the Hebrew Language

The astounding journalist Wolf has a great passion for the Hebrew language, and to this day, he frequently made a statement about Israel and US relations. Blitzer also published articles in several Hebrew-language newspapers.

Under the name Ze'ev Blitzer, he wrote for Al HaMishmar and Yedioth Ahronoth. He also worked for the American Israel Public Affairs Committee (AIPAC) as the editor of their publication.

Besides, Blitzer published his first book, Between Washington and Jerusalem: A Reporter's Notebook, which is about his personal development as a reporter, and the relations between the United States and Israel. Scroll down to know his net worth.

What is Wolf Blitzer's Net Worth?

CNN's lead political anchor, Wolf Blitzer, has a net worth of $16 million as per multiple online tabloids. Throughout his triumphant career, the journalist has built a solid reputation. He has earned huge wealth by working at CNN as a senior reporter for over two-decade. So that you know, CNN's Anderson Cooper and Abby Huntsman are among the highest-paid anchors.

How much is Wolf Blitzer's salary? Well, The Situation's Room host, Blitzer, earns an annual salary of $5 million. Apart from hosting shows, Wolf has made several film appearances. He has acted as himself reporting on activities, including the James Bond movie Skyfall. He also got a role in the 2016 film Batman v Superman: Dawn of Justice. Likewise, Blitzer has made guest appearances in Netflix's House of Cards.

Watch Wolf Blitzer talking about being in Mission Impossible!

In addition to that, Wolf appeared in the 2018 movie, Mission: Impossible Fallout and in an episode of Ben 10: Omniverse. Through all these projects, he must have earned an enormous amount of wealth.

Interestingly, Blitzer appeared on the September 17, 2009, edition of Celebrity Jeopardy hosted by Alex Trebek. By finishing with the round, he received $4,600 as well as he bet $1,000 for the last jeopardy but ultimately lost $2,000.

At the time of purchase, Wolf was the Jerusalem Post's Washington correspondent.

Visit Marriedceleb To Know More About CNN Reports And Other Journalists.