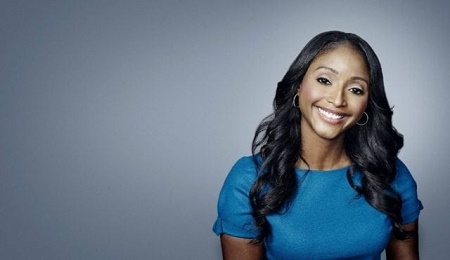 Peabody Award winner Isha Sesay is best known as a journalist and reporter who worked for the news channel CNN. She is also known for representing the African-American community and reporting African issues on the international stage. To add to this, she also created a lot of buzz for leaving CNN because of the networks focus on reporting POTUS Trump and his activities extensively.

Isha Sesay was born as Isha Isatu Sesay on 6 January 1976 in London, England, to the father, Mamud Sesay, and mother, Kadi Sesay. She was raised with a brother named Mamud Sesay and a sister named Jane Sesay. The 43 years old is of British and Sierra Leonean descent.

Isha Sesay is single as of October 2019; however, she was previously married in the past to her boyfriend turned husband, Leif Coorlim. By profession, her ex-partner is an  American TV editor who serves as an executive editor of the CNN Freedom Project.

Reporter and editor first met in 2008 when the lovebirds worked at CNN. Then they got engaged on January 5, 2013, after around 5 years of dating. Finally, this former couple officially pronounced as a wife and husband on 17 August 2013 in front of their family members and family in an intimate ceremony.

Well, their wedding ceremony took place at Waldorf Astoria Atlanta Buckhead, Atlanta, Georgia. After Susan's resignation from CNN, she claimed that she and Leif were no longer together in an article published by an online magazine in 2018. Nonetheless, the pair had no children together.

Sesay has worked in the news reporting industry for more than 2 decades in a broadcasting career. Her net worth is around $1 million as of 2019, gathered throughout her work as a news anchor, reporter, and journalist. Likewise, other TV hosts, Morgan Radford, and Rehema Ellis collects good sum from media network.

The average salary for an anchor working at CNN is around $58,432 per year as of data from Directexpose. Thus, she is also being paid in the same range. Moreover, her best-known work includes the Nigerian presidential election of 2007 and the launch of the Global Elders.

Besides TV career, she has established a nonprofit foundation called W.E. Can Lead in 2014 and has also been involved in various independent social activities.

Isha Sesay enrolled at Fourah Bay College School in Freetown before moving to the UK for higher studies. She later went to Trinity College, Cambridge, and changed her career path to becoming a journalist after initially wanting to become an actress.

Sesay started her career as an intern at the BBC as a researcher on the show Kilroy.  Then in 1998, she joined BBC Scotland, where she worked behind the scenes for a time before landing the job as a TV announcer.  After this, she joined the Sky network before getting the job as a news anchor and correspondent at CNN International.

Moreover, she also worked for Anderson Cooper 360° as a presenter but left the network on 2 August 2018 after citing that the media was focused on United States President Donald Trump.

To read more articles about your favorite celebrities, visit marriedceleb.