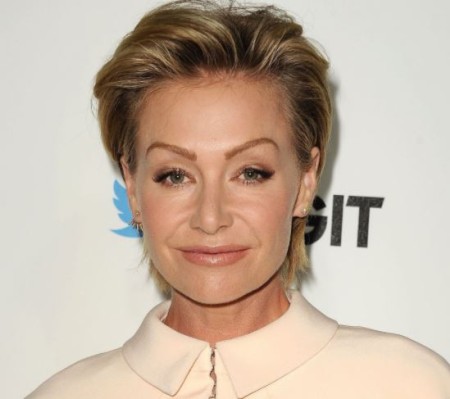 Portia de Rossi and her wife, Ellen DeGeneres, are one of the most popular lesbian couples in the world. While Ellen is best known for her show, Portia herself has accomplished a lot.

Rossi is an Australian businesswoman, former model, and actress. She is famous for her role as lawyer Nelle Porter on Fox series, Ally McBeal. Further, Portia appeared in the American tv series, Arrested Development as Lindsay Bluth Funke.

Until 2005, Portia didn't open up about her sexual orientation. After her relationship with Degeneres became public, Portia willingly discussed her same-sex affair.

The couple first met in late 2004 and became engaged in 2008. For her engagement ring, Ellen gave Portia a 3-carat horizontal marquise diamond ring designed by Neil Lane. The estimated cost of the ring is over $100,000.

The couple's marriage ceremony took place on August 16, 2008, at their Beverly Hills home with only 19 guests. For the ceremony, Portia wore a tulle ball gown with a blush pink skirt, while Ellen wore an ivory blouse, waistcoat, and trousers.

Portia and Ellen don't share any children, but they have adopted several rescued animals. They have been married for over 12 years as of 2020.

Between 2018-2019, multiple online tabloids reported that Portia and Ellen were having troubled married life. As per reports, the pair were living in separate homes, and Ellen had stopped wearing her wedding ring.

Moreover, the tabloids stated that they got into a big fight when Rossi rejected Ellen's idea of adopting a child. However, looking through their social media, the rumors about their divorce is completely false. Portia and Ellen have never been happier.

Past Marriage and Relationships

Rossi first married a documentary filmmaker Mel Metcalfe from 1996-1999. Her marriage with Mel was a plan to get a green card, which she later aborted. After the divorce, Rossi dated American actress Guinevere turner for a brief period.

Then Portia dated an Italian-American director, Francesca Gregorini, from 2001-2004. Gregorini is the daughter of actress Barbara Bach and stepdaughter of singer Ringo Starr.

While she was dating Gregorini, Portia began an affair with DeGeneres, whom she called love at first sight. They had met backstage at an awards show.

DeGeneres has gained wide popularity as a talk show host. However, she has also faced criticism for her behavior with guests, co-workers, and staff.

In May 2020, Ellen drew backlash after the past video of The Ellen DeGeneres Show resurfaced online. Many social media users accused Ellen of mistreating and manipulating her celebrity guests.

Over the past few months, Ellen has been drawing a lot of criticism and backlash. Several celebrities such as Katy Perry, Jay Leno, Alec Baldwin, Ever Carradine, Kevin Hart, etc. supported DeGeneres. On August 3, 2020, Portia posted a picture that quoted "I Stand By Ellen."

The Screen Actors Guild Award-winning former actress, Portia de Rossi, has a net worth of $50 million as per celebritynetworth. On the other hand, her wife, Ellen, has a huge net worth of $490 million.

The majority of Portia's networth comes from her world's richest comedian wife. Ellen gives her expensive gifts, such as once she gave Portia a $160,000 worth rare car in 2014. Further, in 2019, Ellen gave Portia a silver Lamborghini.

The former actress and her comedian wife are serial house flippers. Since 2003, they have bought and sold over 20 properties. Let's take a look at some of their high-profile flipping.

In 2004, when Rossi and Ellen began their romance, the couple purchased a mid-century modern home. They paid $1.275 million for the Hollywood Hills home nicknamed "the treehouse" due to its 2,000 sq.ft. of outdoor living spaces. The duo sold the property for $2.1 million in 2015 to late actor Heath Ledger.

In 2007, the couple bought a beautiful mansion for $15.75 million in Montecito, California. The same year they sold it for $20 million.

In 2007, Portia and Ellen acquired a 9,200-sq-ft property in Beverly Hills for $29 million. Also, they bought the two neighboring homes to include in the property.

They married at this house. After four years, they sold the house to Ryan Seacrest for $49 million in 2012 as per TMZ.

In 2017, Ellen and Portia purchased a property in Montecito, California, for $7.2 million. They sold it to Tinder founder Sean Rad for $11 million in June 2018.

In January 2020, the celebrity couple nabbed an antique English estate in California for $3.6 million.

Just after three months of buying the historic house, the couple listed the 5,500 sq.ft. estate for $6.9 million. In April, singer Ariana Grande purchased the home for $6.75 million.

Portia is actively involved in a lot of charitable organizations. She works with a group called Locks of Love that provides human hair wigs for children with alopecia and other medical conditions.

Portia Lee James was born as Amanda Lee Rogers on January 31, 1973, in Horsham, Victoria, Australia. Her father, Barry Rogers, died when she was nine. She is still close to her mother, Margaret Rogers.

Portia started working at the tender age of 11 when her mother was struggling to provide for the family. She began her career in the entertainment sector by working as a model and actor for TV commercials and print media.

At 15, she legally changed her name to Portia de Rossi. She took the name "Portia" from Shakespeare's The Merchant of Venice's character. She also took the Italian surname "de Rossi."