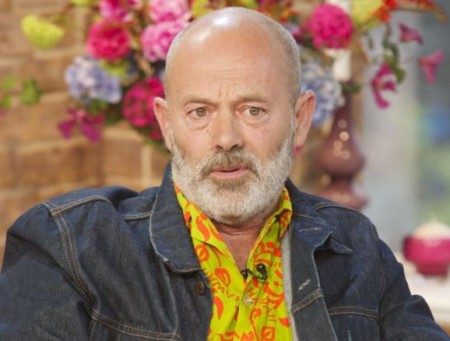 Keith Allen is a Welsh-English actor known for playing intense characters on both small and big screens. He played serial killer, John Cooper in ITV's mini-series, 'The Pembrokeshire Murders.' The show premiered on January 11, 2021, and has been earning a positive response. Further, Keith is also known as the father of Lily Allen and Alfie Allen.

Besides an actor, Allen is a comedian, musician, singer-songwriter, artist, author, and television presenter. He is known for appearing in movies like 'Shallow Grave,' 'Trainspotting,' 'Kingsman: The Golden Circle,' etc. Likewise, Allen's tv works include 'Robin Hood,' 'Bodies,' 'The Runaway,' etc.

The 67-year-old actor has been married twice and has five children from four different women. At present, Keith is in a relationship with actress, Tamzin Malleson. The two were co-actors on BBC's medical drama series, Bodies.

Keith and his partner, Tamzin are yet to be married. They began dating in 2004 after meeting on the sets of Bodies. Two years later, the couple welcomed a daughter named, Teddie-Rose Malleson-Allen.

Talking about Allen's girlfriend, Tamzin, a 46-year-old English actress is best known for her lead roles in Channel 4's series, 'Teachers', ITV's 'Midsomer Murders,' and BBC's Bodies. She and Keith appeared together in ITV's 'Marcella' in 2018.

If you noticed, Keith and Tamzin has an age gap of 21 years. The couple is no exception as there are actors who are dating or married to a much younger partner. Take Stellan Skarsgard and his wife, Megan Everett for example. Stellan is 25 years older than Megan.

Allen and Tamzin's first daughter Teddie have followed on her parents' footstep. Well, she is aspired to become an actress and she began her career at age 9. Further, Teddie appeared as Frances in the 2015 television movie, 'Cider with Rosie.'

In 2016, Teddie played Tatty Walker in the film, 'Swallows and Amazons.' Likewise, she shared the screen with actors, Matthew Goode, Paula Patton, and Billy Jenkins in the 2020 film, 'Four Kids and It.'

Allen and Owen were married from 1984 until 1989. They shared two kids, Lily and Alfie Allen. When Alison was a teenager, she gave birth to her daughter, Sarah Owen. However, Keith loved Sarah as his own child. Further, in many interviews, Allen said that he is the father of six children. In reality, Keith has five biological kids.

Children from Other Relationships

After divorcing his first wife, Keith started dating a woman named, Angela Talbott. Their relationship was low-profile as there is no information about Angela. The former couple welcomed a daughter, Gala Talbott in 1991.

On the other hand, Allen's other daughter, Rebecca Allen completely stays out of the spotlight. There is no information about her mother, her birth date, and her current status. Likewise, Keith was married to his second wife, Nina Park from 1997 until their divorce.

Keith's first two children are most famous for their work in the entertainment industry. Lily Allen is a singer, songwriter, and author whose first single, 'Smile' reached number one on the UK Singles Chart in July 2006.

Lily's second studio album, 'It's Not Me, It's You', along with her 2014 album, 'Sheezus' debuted at number one on the UK Albums Chart. She released her autobiography, 'My Thoughts Exactly' in 2018.

If you are a fan of HBO's popular show, 'Game of Thrones,' then you must know Alfie Allen, the actor who played Theon Greyjoy from 2011-2019. He has appeared in movies like 'John Wick,' 'The Predator,' 'Jojo Rabbit,' etc.

The renowned Welsh actor, Keith Allen has a net worth of $10 million as per celebrity net worth. However, there is no strong evidence to prove his fortune. Back in 2017, his daughter, Lily received backlash after complaining about her financial problems. Lily said that neither she nor her dad was multi-millionaires.

Watch the trailer of ITV's mini-series, The Pembrokeshire Murders!

As per celebrity net worth, Lily's current net worth is $5 million. Likewise, Alfie has a net worth of $6 million. Well, Keith has been active in the entertainment industry for the past 41 years. Considering his long professional journey, Keith's wealth is justifiable. He owns an American style diner along with his partner, Tamzin.